Edit
watch 02:58
No Man's Sky Update - The Loop
Do you like this video?
Play Sound

Zek, or The Orcish Wastes as it is often called by men, is a portion of the remnants of the once-mighty Jaggedpine Forest. The orcs of the Deathfist Empire have held control of the entirety of this island for many years and, in that time, they have reduced the once-sprawling forest to a mere husk of its former glory. Much of the forest has been stripped down to barren, charred earth. The orcs have begun mining deep into the ground for iron and coal, and using the timbers of the ancient Jagged Pines to construct their warships. What was once a thing of beauty is now, for the most part, a grand redwood forest on the verge of becoming a wasteland of orc industrialization.

Zek has become a battlefield of sorts, as a band of woodland defenders named the Green Hoods have seized control of a coastal keep. From this keep, they now launch assaults against the orcs stationed on the hills opposite the beachhead. They also sneak small teams through the enemy lines and send them deep into orc territory to gather information and to disrupt orc organization. - (Source: Cogglesworth's Tour of Norrath: Part 1)

The Orcish Wastes are riddled with natural barriers that divide the land into valleys. Orcs inhabit many of the valleys, but dangerous wildlife also inhabits many of them. The Deathfist Orcs have plundered the land for timber and ore, and most regions are utterly scarred. Grass grows in some areas, but is often trampled and flattened. There are no known flowering plants in the whole zone. Also, a great open pit in the center of the island exposes a vast mining complex.

Travelers arrive at Warship Dock on the south shore of the island. From there, you can take high-speed horse routes to a handful of checkpoints throughout the zone. Otherwise, travel must be done by foot or by mount.

Travel through Zek is hindered by impassable terrain. Almost all passable routes are marked by roads. The roads are almost as dangerous as the rest of the land, and a traveler must be wary and know his escape route, lest he flee into even greater danger. Orcs and even hillcats are known to set ambushes to catch the unwary.

Those who complete a quest called The Right Brothers will earn the right to use a catapult at Warship Dock to fly instantly to the valley beside Deathfist Citadel. Completion of this quest requires venturing inside the citadel with a group. 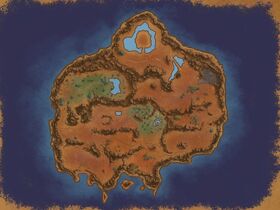