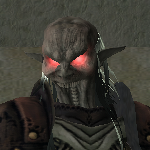 Sure thing. Before I do that though, I'd just like to say it's great to have someone working on the new content!

When you're making monster articles, try to name them as close to the actual in-game name as possible, including capitalization. The wiki automatically capitalizes the first letter in any article, but other than that, try to make it match exactly. And when you upload a monster image, upload it to the exact same name that the article is and it'll display automatically. That'll save you the work of having to manually fill out the iname and idesc fields too.

As far as images go, yours look great so far. Something that I've found helpful - you don't have to do this but you might want to - is there's a way to set the game options so monsters don't glow if you roll the mouse cursor over them. Then you can make their names appear by putting the cursor over them without having them get discolored. It's useful for really big monsters, or super-aggressive ones that see inviz.

just realized I forgot the most important thing.

Don't stress out over whether you're doing something perfectly or not! There's a learning curve, especially with all the templates in use here, and plenty of people around to help out and fix things. A monster article at a name that isn't 100% perfect only needs a page rename - a monster article that doesn't get written at all isn't useful to anyone, right? Jeff (talk|stalk) 22:47, October 8, 2013 (UTC)

To get rid of the glow

I'm not a boss. I've been around for a while and I'm pretty experienced, but I don't have any authority. And I've made spelling mistakes before - for example, here where I spelled Field Marshal Vishra's name wrong and someone else caught the error.

Technically I'm a 'rollbacker', which is a little more advanced than a standard user but not enough so to make me a boss. Standard users can move pages, rollbackers can move images, and it takes a full administrator to delete a page or image or block a misbehaving user.

The actual bosses are listed at Admins.

Heya. Icons are complicated - in fact they're such a pain in the butt to deal with that a lot of editors just don't bother trying to do them. They're supposed to be 42x42 pixels - that means it has the entire frame but nothing outside the frame, and yeah you're supposed to look through the list of icons and find the right name. Like I said though, as long as the articles are getting written it's not too big a deal. There's also the copyright aspect, where you're supposed to add {{ss|-}}to them when you're uploading them because otherwise they're copyright violations, and then you have to add the right categories to them so that they show on the list of icons - so like I said yeah icons can be hard to deal with.

So if I were you I just wouldn't worry about the icons at all. I've been doing them long enough that it's easy for me and I'll probably be by to fix them. As long as you upload the equipment examine window it's usually going to be super-easy for me to add the right icon, and also the icon's the least important part of any equipment page. Probably less than half of our equipment pages have icons. So you know, don't stress out over them and make editing a chore.

For "bluestats" there's two places to look. If you start a new equipment page, there'll be a box with a list of a lot of the commonly used bluestats. If you don't see the one you're looking for there, you can get the full and complete list of them at Template:EquipInformation. On rare occasions SOE will add a new stat, and if you catch one of those, the person to talk to is either User:Chillispike or User:Lordebon, they do most of the template tinkering. Jeff (talk|stalk) 03:17, October 17, 2013 (UTC)

grats dude! Dedicated Awarded for contributing to the wiki every day for 60 days! earned by Paceyourself 5 hours ago

by the way, i have to warn you also - the most active people on a wiki tend to be sticklers, the bureaucratic type, and people with various mental problems, so you better not reach the top-3 spot, then you might still be save side.

Please ignore the user above. We appreciate all legitimate contributions. Users that wish to do nothing but troll will always find a cool reception however. You won't have to worry about this particular user now. Sorry for the bother. --lordebon (talk) 17:08, November 20, 2013 (UTC)

The way you have the armor set effect on Repaired Girdle of the Terranai is correct; currently the template is set up to list the effects further down in the armor set rather than up above where it is in-game. It might be something we can change to make it look more like in-game, but that'd be done template-side; for now you're doing it perfectly correct. Cheers! --lordebon (talk) 20:59, January 18, 2014 (UTC)

Thanks for the compliment! I've been working on the equipment redlinks and now have a better understanding of why they're redlinked. It seems that the majority of them are pretty complex or create additional redlinks. You'll probably see more {{Admin Needed|Because I'm metagrobolized...}} as I move forward...

Good idea on making a sand box. I didn't really expect many people to leave messages on my profile page but it is starting to seem cluttered so I took your advice and make a sandbox page. Jado818 (talk) 15:11, January 25, 2014 (UTC)

I must have been a messy kid because mine's just FULL of junk... I wish you much success and hope you enjoy playing around in there!

Heya, Pace. (I assume we are on a partial-name basis by now ;) ) We must be on a similar wavelength. I happened to see you made an edit on your user page for useful links right after I absconded with this bunch from Chillspike. It's like a spidey sense, perhaps?

Feedback, if you have time/energy/patience

Mind giving some feedback? You seem fairly obsessed...err interested in...uploading a great number of images/creating pages for gear categories in tandem (I think that's you, but it is almost 3am where I am,). I recently failed (gasp!) at correctly making a new category page related to housing and found myself explaining why I think change is long overdue. I'll warn you that my description of why is very detailed, very long, and may be boring unless you're feeling extra information-nerdy. If you're up for it or have any ideas, comment there or on my talk page. Here's the link, for the not-faint-of-heart. Yasuewho (talk) 08:05, March 20, 2014 (UTC)Yasuewho

I just wanted to say thank you for all your contributions on the EQ2i site! It's truly appreciated. :)

Iconnum, the SoE feed, and stuff

Heya Paceyourself. Thought I might ask you some advice for a change.

It looks like census might not be able to handle negative item ids, so for it's purpose they seem to have assigned them a different id # (in this case, the item you linked above . The way to go in this case right now is just to use a search query, in this case http://census.soe.com/s:eq2i/json/get/eq2/item/?displayname=Cryptic%20Unlucky%20Spaulders%20of%20Luck&c:limit=20&c:hide=_extended brings up the information for all of those with that name; you can use the description for which one is which in terms of # of gems. It might be possible to search by the gamelink instead, but that doens't seem to want to work for me currently. --lordebon (talk) 15:16, April 23, 2014 (UTC)

Nice to meet you. After reading your message about my icons I started reading your talk page as was pleasantly surprised to find a way to use the SOE data feed to generate a large portion of icons. I will be using that method as much as possible from now on.

If you have any other suggestions please let me know!

Retrieved from "https://eq2.fandom.com/wiki/User_talk:Paceyourself?oldid=637778"
Community content is available under CC-BY-SA unless otherwise noted.