I love the mods in EQ2. Gems you can add to gear (um, I mean, adornments), plus the trippy trio of Refining, Experimenting and Infusing. Little buffs can add up and so I decided to document my latest foray into Minmanxing. As usual, I'm not attempting to max everything out totally or go for Visionary, nor am I using gear made with Raid drops to begin with (that happened back in Skyshrine), etc. That's too much stress. Nice if you can handle the tension, but I'm only reasonably risk tolerant. I do love a chance to take a few risks though, as long as the benefits are there.

So, having a nice pile of rares from my diligence in Twark looking for Shadeweave Buds, I set out to see how far I can currently push crafted gear without too much stress. Note though, that many Legendary and higher items can be Experimented, I just happened to start with a Bloody Tooth item I crafted (part of my low stress plan, if I break it with Experiments, I can make another). Also, pretty soon this item will be of questionable usefulness because as soon as I have two Ascention earrings, they will blow away any stats I can get from Bloody Tooth. But for an alt, this can be a nice intermediate step. I can also unattune it and make it into a hand me down.

I suggest you open it in another window full size. From left to right, the plain version, the refined, then each of the Experiments 1, 2, and 3. I didn't push beyond 3. In my experience, the third experiment step is often harder than the fourth, so it's reasonable to go one more step. But this time I got down to about 25% durability so I stopped at 3. I rarely if ever try for Visionary, not because I worry about losing it, but because it's stressful enough to go three steps, it would detract from the fun to go farther. It's nice the option is there though, options are good. Obviously the Refining step is less essential all by itself. But when combined with Experimenting and more, it has a compounding effect that I consider essential.

I've noticed that if you refine carefully and slowly, one at a time, the yield of purified rares increases dramatically. Try it - Lower your "max refined quantity" and make sure it's instant cast. Shortcuts are not often rewarded in EQ2.

Experimenting tips: You can find several guides to Experimenting that are decent. Example: http://eq2.zam.com/wiki/Experimentation_%28EQ2%29 I learned from that one, but it may have some outdated things in it. I haven't checked it lately. Learn the meaning of a "crafting round" (ie. like rounds in combat, a unit of time that has a certain result). Turn on the sounds, especially 3D sounds, be someplace where you enjoy the music (I happen to find Kelethin's music soothing while I craft so that's where my craft house is), Listen for the end of a round, no do not follow the instructions that say a round "begins with the numbers overhead. The round safely only begins when you hear the sound or you see the bars move (durability and/or progress).

It's true that the round begins with the numbers overhead. However, you may get a 1/2 to 1 second delay before the reaction art appears (the "Counter" that you need to nullify). So if you're too quick, you can make a damaging mistake. It's safer to wait for the sound and get in an audio-rhythm.

During every round, whether you have a "counter" to nullify or not, attempt to use a pair of reaction arts that complement each other. That's called "Active Crafting."

Nullify "counters" in pairs or threes. This depends on your quickness and daring. If you just want to ensure 90% success on Experiments 1-3, then use the dual-counter method described here. Look how I've rearranged my buttons. Read the buttons, knowing that 1-2, 3-4, and 5-6 are pairs that are used together within a crafting Round. So if you get a lightning strike image, you can counter with both the lightning and the blue rectangle and overall have a benefit.

If you hesitate, or your cat jumped on your keyboard, or you got a "counter" but it's on cooldown... just press the "counter" nullifying button only (if needed) and wait until the end of the round. Rhythm is more important than all other rules since it prevents mistakes.

Read the reaction arts even more carefully to discover the three counter method for yourself. No amount of explaining by anyone can help you understand it if you don't have the effects memorized. But it's not needed unless you're doing this all the time and going to Visionary. Other forum posts may have other methods explained but for each one, you should have all the buttons memorized.

The Adorning Rule for Experimentation

Ask yourself, is it important enough to Experiment? If you're looking at a 1.5% improvement in Potency, would you ever bother to adorn such a small benefit on a level 100 item? Maybe if the item was level 30, but this isn't. We each make up our minds about things that are hazy like a 500 improvement in Ability Mod, but a 1500 AM improvement is likely to appeal to anyone and you can't find an adornment of that effectiveness (except for the trio adornments that come from the Crafter's Epic Quest 2.0, or the Wantia AM adorn - both expensive options). I'm also not on the bandwagon that says that stamina is unimportant. One of the best adornments for stamina at the moment is the Electrified one and its bonus is merely +52. The crafted ones are not much better. So a +85 to stamina fulfills the "Adorning rule" for Experimentation.

Incidentally if you're looking for cheap adornments, run the Advanced Solos in Altar of Malice expansion, it can save a lot of plat on your alts that you only solo with anyway.

The graphic shows the second step of Experimentation, so notice I could still get another 10% Potency (making the total buff from Experiments around 30% instead of 20%), but I'd used up my risk tolerance that day. I can always go back and Experiment again tomorrow. And so can you, don't get stressed or it will lead to Experimenting mistakes and eventual quitting in frustration. That will amuse your friends but does nothing for you. :*D

Infusing is hard to explain. It takes trial and error and a nice bank of reconstructed infusers and dropped ones. If you haven't done it before, wait until you have collected around 30 of each type of the Skyfire infusers in your shared bank, and a 100 stack each of the handcrafted ones before you do. For some reason I find the Crit Bonus Skyfire ones are the hardest for me to bank. Let's take a look at what it took for me to feel like I've "maxed out" what I can do for this particular item. It isn't "maxed" but I'm at my limit for how much I'm going to invest in it.

This is a hands on visual guide to what happens during infusion attempts to familiarize others with the process. There are much more detailed guides elsewhere for the actual numbers, potentials and the concept of "Layers" which I did not go into here except by implication. In fact, when I did this just now, I realized that my understanding of layers was actually pretty good just intuitively, but I did go back and re-read the guides I used early on. For your perusal, the in depth guides I like best are the following:

Now back tot he hands-on: I added infusions according to this pattern: Ability Mod - until my % dropped to 0 in all but Plat infusions, Potency the same, Crit Bonus - until I was down to about 10 in my shared bank, and finally Stamina until I had a 0% chance with any infuser I had. Then I added a few plat infusions here and there to either change-up the method of infusion, or to see what happens. In all I probably spent around 1000 plat on infusing this item, and another 500 for buying handcrafted infusers (I can craft them, but I was in a hurry and they were cheap enough. In this example I used about half handcrafted and half skyfire unless the % chance was zero in the infusion panel. I had a few advanced Skyfire infusers from a Heroic zone or two. They were used to change the method here and there. 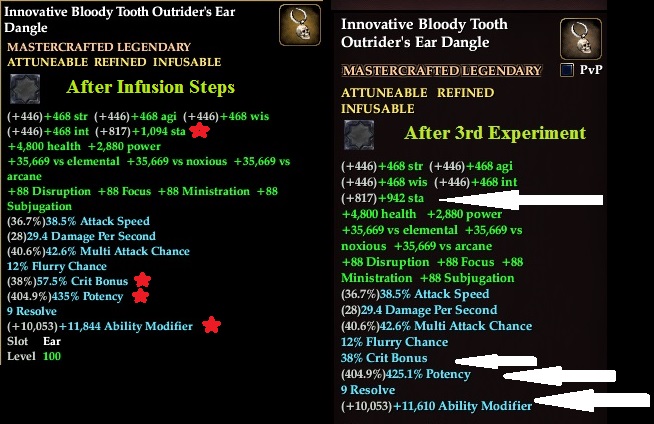 The parts I'm most happy with there are the Crit Bonus and Stamina gains. I could've had the 10% Potency by experimenting one more time for Potency, and I still can. But the Crit Bonus doesn't benefit as much from Experiments. So that explains their relative rarity compared to the others. I'll illustrate some of the steps that went from the Product of Experimentation to a completed Infusion session here:

So that's the tale of an item that went from newly crafted to fully buffed (to my level of tolerance for risk and plat payment). I believe it was worth the effort as long as the stressful parts are managed.

Also consider that I could've turned around and sold the item but there is no way to search for such minmaxed items on the broker. You just have to look at every single Cloak, Earring, ring, boots, weapon, etc and comparing the stats of each. I do wish that such crafting expertise were better rewarded by being searchable on the broker. But for the moment I will enjoy my new earring, and hope that you are inspired to try this for some of your items.

Retrieved from "https://eq2.fandom.com/wiki/User_blog:Subaltern/A_Reasonable_Item_Upgrade_Example_-_Refined,_Experimented,_and_Infused?oldid=706482"
Community content is available under CC-BY-SA unless otherwise noted.