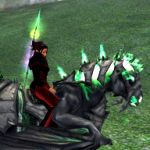 Thanks to my Forepersons April 2018Edit

I got around to working on my fighter. I laughed so hard when I saw "forepersons" in this dialog. As a female descendant of the Steppes [1], although far removed from that heritage today, I am now playing a female warrior. Thanks Daybreak, for being PC about the fighter class. That must've been a discussion in the game design offices. I'm sure that bold emails were written on the pro and con side of whether or not to be PC about it. And they deserve thanks for discussing it and for bravely being PC about it. There are probably thousands of military women who also appreciate it.

So I decided to play a tank for a while because really I've done all I want to do on my mage (yeah I could upgrade all my gear from 26 resolve to 29, but meh I'll wait for summer ethereals).

I'm not a raider, and I see the need for tanks in just general heroic play. Not sure how it will work out to not be a raider and be a tank, but we'll see. So far, the resolve mechanic has kept people alive if they've taken aggro. I mean, it happens a lot that I'm in a group with people who are raiders and here I am without my epic 2, and 25 million health. This is a good thing though, because without the ability to do that, there is no game, just groups of people who work together and can't work with others. The real game is in the flexibility of the heroic play. Raiding is raiding, but heroic is just social/fun/inviting. Without it, there's too much attrition.

So yeah, I'm scared. I'm playing an undergeared tank. Any minute my group can get sick of it and quit on me. But most of the time we're doing well, especially if I can convince a coercer to come along. Or maybe I just think I'm convincing... maybe the coercer is convincing me...

And they said this game was dead! Hah! Having a good time at Hero's Festival 2017. I'd show off my bling, but I don't think I can find myself in that crowd! This was on Sunday the 12th of November on Skyfire server. Similar crowds on Public Test in the afternoons. My red-outfitted Necro is loving the new red lion puppet mount... get it? Red Lion? Also, you still have 4 more days to get the special bovoch mount for going on Test getting the achievement. I can't believe Frostfell is only 3 weeks away!

Well an update. I bounced around a bit, decided on the Mage Epic 2.0 first since it is rumored to be "easier" than the others, but more grindy. I can handle grind... I can always take a break from it, there's plenty to do. Started exploring PG's, and the good stuff you can get there. Seeking 20 Resolve gear can be tedious and like many, I'm suspicious that the next expac will make it all moot anyway. Started grouping whenever possible with SK and Warlock. Tinkerfest was a blast, well, several. My casual hint for the summer is: don't believe the hype, lots of people want heroic groups, not just experts. Hint: ask for a puzzle mount group. :D Subaltern (talk) 01:31, August 29, 2017 (UTC)

Heya, this is Subaltern. I'm nowhere near the best player, and not a completionist, perfectionist or religious believer in guilds / grouping / raiding. If that's your thing, awesome, but not mine. I'm happy questing, collecting, crafting, selling Kronos to maintain my expensive in-game lifestyle. ATM (spring 2017) that means I'm the one buying up the Twark gear, sometimes Bloody Tooth, and generally falling comfortably in the middle of every parse. Don't knock it, it took me years to develop this underachiever streak. There was a time when I HAD TO HAVE the best gear, be in the top raid guild, etc, etc... but I'm done with all that. Now when I hear the word "must" follow the word "you" I just tune out and go play something fun, like a Mission. Not my bag... I prefer to make jokes. The new PQs are much more my style since I also alternate with Rift from EQ2. Lately I've been trying Guild Wars 2 out, and I played LOTRO seriously once upon a time (I like the loot rules there, possibly the least abusable imo). Nice games, but harder to get used to. It's been years since I leveled a character from 1 to max anywhere and that means EQ2 will probably be my home until it shuts. Hopefully after I'm dead, please. I like my castles in the sky.

Retrieved from "https://eq2.fandom.com/wiki/User:Subaltern?oldid=860839"
Community content is available under CC-BY-SA unless otherwise noted.