watch 02:45
Wiki Targeted (Games)
Do you like this video?
Play Sound

Tserrina the Enchantress and The Courtship of Mayong[edit | edit source]

Tserrina Syl'Tor was originally a Tier'dal enchantress within Neriak during the time of King Naythox Thex. Due to her superior arcane ability, she was given the title of "Enchantress of Neriak" by King Thex. Tserrina Syl'Tor was a powerful Tier'dal, with several servants and handmaidens to include her "best friend", Cara Omica. She performed an unknown ritual out in "The Wilderness" (Probably Nektulos Forest) in an attempt to gain immortality, but there were no immediate results from the ritual she undertook. Frustrated, Tserrina moved on and began an on again off again relationship with Mayong Mistmoore who wanted nothing more to use her power and turn her into one of his many Vampires. At first, she was jealous of Mayong who appeared to want to spend more time with his creations then with her, but Mayong was merely stringing her along. He would talk with her, show her some attention, then at times ignore her and pay her no mind. This drove her to him even more so, increasing his control over her.

Mayong commissioned the Tower of Frozen Shadows so that Tserrina and Mayong could reside in and be wed within, with of course the cadre of servants from both Mayong and Tserrina.

Mayong gave Tserrina a glass of his blood with the intent to turn her into his immortal vampiric partner. This did not have the expected results, as Tserrina became ill and then began to become something that was other then the vampiric partner that Mayong had expected to gain. The combination of Mayong's blood and the results of the unknown ritual she performed "Out in the Wilderness" began to change Tserrina into something other then what Mayong was expecting. Mayong subsequently left the tower to investigate why she was not changing into a proper vampire, leaving Tserrina alone for several "moons" beyond his expected return date. It was during this time that Tserrina learned that the Tower of Frozen Shadows was not just a wintery romantic get away, but a prison to keep Tserrina contained. Enraged, Tserrina expanded the curse of the tower to all the servants who reside within, trapping them all within its walls.

As Mayong spent time away from the tower, Tserrina's appearance continued to change which probably continued to drive her further mad. The servants would all be on edge in her presence, stepping lightly and appeasing her as she drifted further into insanity. Tserrina continued to prepare for Mayong's return, preparing the Tower for the Wedding that would bind the two together. It was upon the day before her wedding that Tserrina's transformation became complete. She sprouted a pair of bat like wings from her back, her body becoming something that wasn't Vampire, Tier'dal, or Fiend, but the worst parts of all three. Mayong of course did not return on the date of their wedding, further pushing Tserrina into insanity. Cara Omica attempted to console Tserrina about the loss of her beauty. Tserrina returned the favor by stabbing Cara Omica with her Embalmer's Skinning Knife in the face, scarring the woman forever. On the day that a servant from Mayong (Ach'erin) and a servant from Tserrina (Dizzina the Lulled) were to be wed (By High Priest Mohnt), Mayong Mistmorre finally returned to the Tower, confronting Tserrina. Seeing the state she was in, he called off the wedding, ensured that she would be entrapped within the Tower forever, and departed the area. It was in this moment that Tserrina's maddness drove her to slay everyone in the tower, forcing all to remain within its walls forever. However, probably due to her overwhelming love for Mayong, apart of her soul split from her body. This part of her soul never made it past the wedding day, always waiting for Mayong to come and wed her. This piece of her soul resides on the 5th floor of the tower, at the altar.

After the Shattering while Velious was separated from the rest of Norrath, Tserrina somehow was able to kidnap the Coldain king, Dain Kalus Frostreaver the IV. The Coldain have enlisted the aid of newly arriving adventurers to traverse the Tower and rescue their king. Adventurers, in fighting Tserrina, discover the curse that keeps her bound to the Tower and release her from it, allowing Tserrina to escape the tower and seek out her vengeance against Mayong Mistmorre.

From Hate to Malice[edit | edit source]

After finally escape the tower of frozen shadows Tserrina stumbles across the cult of the primordial malice and joins their ranks as high priestess of malice now devoted to her new cause, the Ressurection of Lanys T'vyl.

Statue of Tserrina before she was transformed 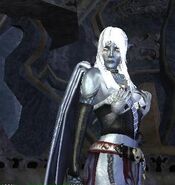 Tserrina on her Wedding Day

Tserrina Trapped by Dain Kalus Frostreaver the IV
Add a photo to this gallery
Retrieved from "https://eq2.fandom.com/wiki/Tserrina_Syl%27Tor_(Lore)?oldid=1306915"
Community content is available under CC-BY-SA unless otherwise noted.