As the world of Everquest 2 has grown, so have the modes of transportation you can choose. There is travel throughout to world using of intra-zone (from one zone to another) and inter-zone travel (travel within various regions within a single zone). This guide will provide you with a basic understanding of the many travel options you have as well as, describe the types of personal transportation you can use, like mounts. It will not cover abilities or spell-based travel like the Call to the Guild Hall. Once you have a basic understanding of the various modes and types of travel in Everquest 2, it's much easier to locate and use them as your journey continues.

Note: for those who chose to play on the Time-locked expansion (TLE) servers many of these travel options may not be available yet and/or may never be available (e.g. no flight on the PvP TLE server). Access to zones and travel is based on the expansions added to those servers as well as server-specific rule sets aimed at capturing the nostalgia some players have for older game mechanics. In some cases, different mechanics may apply to TLE servers too; for example, mounts on the TLE servers have slower, varied speeds. See the Server Types page for more details on travel and other TLE-only limitations.

In essence, it can be said there are three modes of transportation you will use to travel:

Mounts are personal mode of travel. When you get a mount, it will automatically appear in the Mounts tab of your character sheet. In order to equip a mount, you must open the Character window (press C to open it) and drag the icon of the mount you want to use into the equip slot. After it's equipped you will summon the mount using the saddle icon in the character sheet (an ability you can also drag to a hotbar for easy access).

You have the freedom to choose an appearance for your mount my dragging a of the same category into the appearance slot to the right of the equip slot. Many mounts provide stat bonuses for adventure or tradeskills, but (like all appearance-slot gear) you will only get the benefit of the stats when they are equipped in the normal gear slot.

While the look of mounts varies, there are four categories that serve different purposes. This is due in part to the way zones have been designed over the years; some have greater height (like a ceiling in a real house) than others. For example, The City of Freeport and Qeynos still have a low height limit, even after major updates to them. All mount types will function like ground mounts in areas where their use is limited by zone "ceilings". All mounts have a level requirement for use.

There are many ways to get mounts in EQ2.

How fast fast you can travel on a mount varies by the category and how they are being used.

As you progress in your adventure or tradeskill, you'll encounter several quests that reward you with mounts you can use at that level. At the end of this page, a small gallery with examples of each type is shown.

This is not an comprehensive list of ways to obtain mounts, but rather a list of some quests all players will typically encounter if they tend to complete content in zones as the progress through game-play.

When you first begin your adventure in the lands of Norrath, your only mode of travel is on foot. As you progress to level 20 you can do a quest for you first mount, a horse that matches the theme of the city you chose when you created the character. Below is a list of starting zones you were able to choose from, with the final quest from a series that must be completed to get your first mount.

At level 50, you can begin a Carpet quest. It looks like a flying carpet, but it is actually a ground mount that hovers above the ground. "Flying" carpets do have a very useful feature that regular ground mounts do not. They "reduce the maximum falling speed of the caster", which means you never reach a dangerous vertical velocity and thus can "leap" from any height without taking falling damage. This is not only fun but highly useful in many places.

Around level 30, any player can get a leaper mount in Butcherblock Mountains by completing a series of quests.

Around level 60 any player can go to Tenebrous Tangle and complete quests for a glider mount.

Great Divide offers 2 quest series that give flying mounts after a few simple quests, then some daily "training" sessions. There are separate (but similar in difficulty) lines for adventurers and tradeskillers. 86+ in your respective profession is needed to start either line. Both are completable if you qualify for both.

The look of both the Globe of Swift Travel and the Mariner's Bells essentially remains the same, regardless of the zones you find them in. They are most commonly near a dock, though they do exist in some locations away from water. You will find these in most cities near starting zones and on the docks of the zones they are used to travel to and from. Most of these are instant travel and when you use them you will usually see a loading screen as you pass from one zone to another.

Cities like Neriak and Kelethin use (city) Teleoptaion Pads that must be right clicked before you select a region within the city to travel to. Gorowyn only has two of these and you simple run over them to teleport from the bottom of the ramp to the top (near the housing, banker, and broker). Because teleportation pads are used in smaller zones, like newer cities, they do not usually have a loading screen or wait.

The following are commonly located deeper within zones (though a few are near docks as well) and they are typically used to reach any zone that floats like an island in the sky (Overrealms) or higher level zones that exist in other planes of reality. In addition, they can be used to reach locations in many zones on the "normal" landmasses also found on the Globe of Swift Travel, but you will be deeper within the zone; for example, you can travel to Enchanted Lands from Darklight Wood using the druid ring. Generally, only one is located within a given large zone, rather than behaving like a linked network within a zone.

All Access members can use the fast travel button above the top left corner of the minimap to fast travel to most locations with a Globe of Swift Travel, Ulteran Spires, or Druid Rings. Some exceptions do exist, for example Obulus Frontier does not show up as an option, even when you can use a regular Ulteran Spire to travel to it.

When using these modes of travel, you do not need to steer or be mindful of enemies. You do not need to own a mount in order to use these. Though the look of this varies in appearance from zone to zone, the manner in which they function is much the same. It's not uncommon for new twists on this type of travel to show up to suit the look and feel as new zones are added to the world. Listing every mode of automatic travel would be cumbersome, but the most common examples are given here to make them easy to identify as you learn to recognize them.

Shown here are examples of quested mounts you can obtain via adventure or tradeskill progression. There are different looks depending on the quest. There are additional quested mounts, but one of each type is shown here for the purpose of example only. 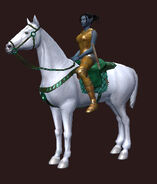 Example of a quested ground mount 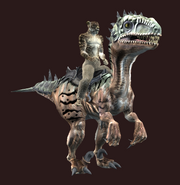 Example of a quested Leaper

Example of a quested Glider

Example of a quested Flying mount
Community content is available under CC-BY-SA unless otherwise noted.
Advertisement