Update for By Land? By Air? By Sea? is in here. The update is a book on the third floor in the same room as the final named. Click on this book and the quest should update and your next step is to kill the named.

Another quest for this zone is Stranded! given by Arcanist Nazoor on the Isle of Aversion in The Barren Sky. This quest requires you to collect 15 book pages from various tables and one book in the Vaults of El'Arad.

Directions: Fly to the Isle of Awakening. Head northwest from the platform, keeping an eye out for a narrow opening in the rock wall. Enter it, following the path upward and around until reaching the Vaults( 311,194,379 ).

The first floor of the zone is linear. Proceed through it. Mobs in this zone have wide agro radii and see inviz, so it's probably best to just clear everything. The last room on the first floor is the Library. The first zone boss, The Arcane Librarian, can be found there. The Arcane Librarian will call for help, so be especially sure to clear out the Library before fighting him. After he drops, the game will emote in purple that "El'Arad is aware of your treachery."

After killing the Arcane Librarian, backtrack until you reach The Ulteran Spire Room. It will have some newly spawned Quellithulian portal mages. Kill those and The Messenger of El'Arad will spawn and attack. When it falls, the teleporter in the center will activate and teleport you to the second floor.

If you're lucky, The Bloodscale Flamelord will be up on the second floor - if not, his placeholder a Bloodscale informer will be. Either way, clear the floor. There are two small pillars with glowing orbs on them which will become active when the floor is cleared. The north pillar teleports you to the third floor, the south pillar back down to the first.

The Arcane Librarian and then The Messenger of El'Arad must be defeated to access level 2. The corner portals are useless; they just teleport you to another side.

Defeat all mobs in level 2 to access teleport orbs (one for up, one for down) 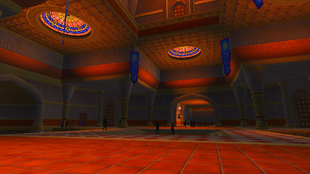 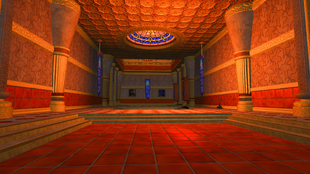 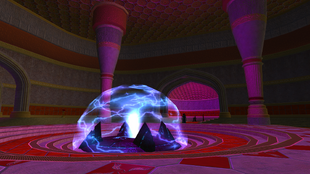 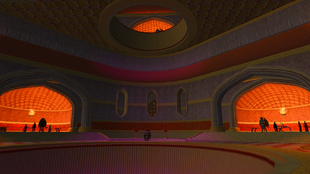 Add a photo to this gallery
Retrieved from "https://eq2.fandom.com/wiki/The_Vaults_of_El%27Arad?oldid=1022533"
Community content is available under CC-BY-SA unless otherwise noted.