Edit
watch 02:30
Dead Cells Final DLC - The Loop
Do you like this video?
Play Sound


The Thundering Steppes are the remnants of the ancient Plains of Karana. This part of Norrath has been ravaged by cataclysms, leaving the plains pitted and creased. The land weeps and festers with the memories of what has been lost: fallow farmlands, bone-covered riverbeds, dead who cannot rest. Amid this trauma dwell the indigenous races of centaur, gnolls and hill giants. A group of Qeynosians have recently begun to resettle the land, but struggle to tame the wild land.

The Thundering Steppes consist of wide valleys separated by impassable hills. The passes, bridges and dry riverbeds create natural choke points which can be dangerous to the traveler. 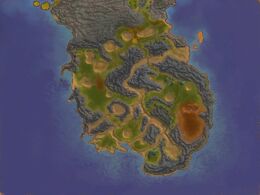 A network of griffin towers eases travel between many parts of the zone. In the past, it was necessary to complete a quest to use the stations. Starting in 2010 the quest is optional, but can still be obtained and completed. The following griffin towers are found in this zone:

The Bridge Keep gates close at nighttime, preventing centaur night-raids north of Crested Lowlands, however prevents pedestrian traffic. The adventurer must complete None Shall Pass! to be granted permission to open the gates.

The Thundering Steppes was once a major travel hub for the Shattered Lands. There is a ship at Dead River Docks that ferries passengers to Butcherblock Mountains for players interested in a leisurely travel experience.

The underground village of Haven is accessed from within The Thundering Steppes. This town is only accessible to those who have betrayed their cities and been forced into exile. The entrance to Haven is a sewer hatch behind the Northern Bandit Camp.

Those who have gained the trust of the Splitpaw Gnolls will have access to Splitpaw Den, an indoor town that contains menders, merchants and other services. See the Splitpaw Timeline for details on earning access.

Unlike most mid-level zones, The Thundering Steppes never received a questing revamp.

Heritage quests started in the zone: