This is the entry zone for the first expansion of EverQuest II, Desert of Flames. From the docks, anyone can take the carpet ride to Maj'Dul or run across the sands to the Clefts of Rujark or the Pillars of Flame.

The Sinking Sands make up the northeastern section of the Desert of Ro. Seen from ship it appears barren, bland, and inhospitable. In reality it is teeming with life of all kinds. Arriving at the Port of Tears, newcomers will find several facilities set up to welcome and encourage participation in local events. Ambassadors from the Courts of Maj'Dul and other local populace introduce new arrivals to the current situation of the desert. - (partially taken from Sinking Sands Creature Catalog)

Beyond the Port, however, other inhabitants make their homes. Crocodiles and caimans share the remains of the Oasis of Marr with spectres and shade prowlers. Narrow pathways lead away from the Port toward the dunes which give the Sinking Sands their name, the Stilled Sea. Without screens of trees or many rock formations, one might feel that every danger found here is easily seen and avoided - however this is simply not true. Within the endless dunes water is sparse and the land is filled with all manner of dangerous beings: wandering lunatics, snakes, spiders, and giant beetles. To make travel here even more daunting, the only water source, the Twin Tears, is guarded by warring factions, the Aliiz Raef Ew Lizardmen and the Anaz Mal Gnolls. These two groups treat any passerby with great hostility. - (partially taken from Sinking Sands Creature Catalog)

Most unsettling is the recent incursion of undead creatures, specifically mummies. Locals will have you believe that these are the former citizens of Ahket Aken, cursed with eternal life, risen from beneath the sand to drag hapless victims into the bowels of the burning sand. This is most likely rumor, yet the region must be sinking into something for it to be named thus.

Many consider deserts to be vast, empty wastelands of dust and sand. Taking a little extra time to be mindful of one's surroundings, one will begin to see the full range of color and beauty that only a desert can offer. The gentle coloration of the natural flora and fauna is soothing, with pale grey-green sages flowing into the soft golden sands. - (Source: Bootstrutter's Trail Guide to the Desert of Ro (House Item))

Travel throughout the Sinking Sands is done via magic carpet, set up at various key locations. After major updates to travel, they are all linked without the need to visit each one. Travel by carpet will take you directly to (or very near) the following destinations: 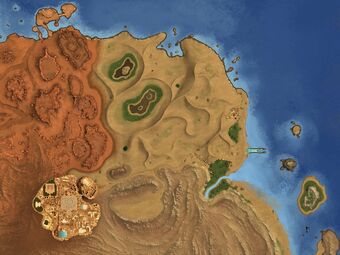