Kerya stayed low and close to the trunk of the tree, ensuring she wasn't in the orcs' line of sight. It had taken considerable study of their crude language to be able to make sense of their guttural grunts and snorts.

"Stronger now!" the larger orc said to the smaller ones. "This new armor will strike fear into the Militia! They will fall before the might of the Bloodskull!"

"The treaty with our Rujarkian brothers was wise, General Vhar'Taug," one of the smaller orcs responded. "With this superior equipment, Freeport will soon be ours for the taking."

The slightest of movements in the corner of her eye caught Kerya's attention. She studied a small mound of dirt near a tree stump some twenty meters away. Nothing further moved. It didn't need to.

With quick, subtle grace, she glided silently away from the tree and clung to a low line of chaparral that she was certain would conceal her movements. As she approached the stump, she could see the outline of another figure in garb similar to her own.

"Roemer!" she hissed as she clung to the ground next to him. "What in blazes are you doing here?"

"I imagine," the assassin said in a whisper, "that I was hired for the exact same job you were. The Militia didn't want to risk that one of us wouldn't make it back from this little reconnaissance mission, so they hedged their bets."

"I can outmaneuver a few dull-witted orcs," Kerya retorted. "In any case, I presume you discovered the same information I have. The Bloodskull have acquired new armaments from their kin in the Desert of Ro. "

"Indeed," Roemer answered. "Some smaller tribes in the Ruins were the first to receive their new gear from the Rujarkians, perhaps as some kind of test. But now the Bloodskull are fully armed, as are the Ree inside the Wailing Caves . I am to proceed to the isle of Zek to determine if the Deathfist are similarly equipped."

She narrowed her eyes. "Once again, we seem to have the same assignment. I've already made plans to sneak passage aboard a ship leaving soon from the Thundering Steppes. Make sure you find a different route to the Orcish Wastes."

Roemer smiled with amusement. "All's fair in our little game, sweetie. That ship's mine if I reach it first."

"You're getting sloppy, Roemer. I spotted your fumbling from clear over by the trees. There's no way you can--"

"There's no way either of you will escape with your lives," Vhar'Taug growled. "Your bones will dangle from the tip of my spear as I lead our forces down the streets of your Overlord's city."

The assassins turned toward the general and his men. Roemer rose to his feet. "Who's the bumbling one who led the orcs to my position?" he asked sarcastically. "Clumsy Kerya strikes again!"

"Don't even start with that!" she answered loudly, her hand slipping lithely to the dagger sheathed at her waist. She crouched and shifted her weight.

"Kill the spies!" the general shouted. The other orcs drew their blades and charged toward them.

Kerya sprung forward and dispatched the first of the orcs with a quick thrust of her dagger as Roemer drew his short sword and engaged another.

"Just like old times, eh Kerya?" he asked as he swung at his opponent. "Kerya?"

He looked around but there was no sign of his companion. More orcs were approaching from the distance, rallying to their general.

"Yep, old times indeed, my clever friend," he chuckled to himself. Suddenly the docks of the Thundering Steppes felt very far away. 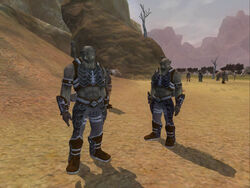 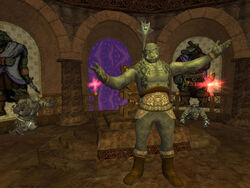 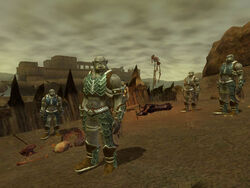 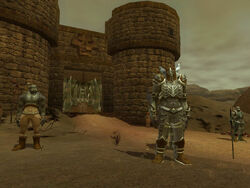 Retrieved from "https://eq2.fandom.com/wiki/The_Rise_of_the_Orcs?oldid=40115"
Community content is available under CC-BY-SA unless otherwise noted.