The Pillars of Flame

Edit
watch 02:30
Dead Cells Final DLC - The Loop
Do you like this video?
Play Sound

The Pillars of Flame are a collection of immense scarlet-sided mesas that rise from the desert flats. On top of each, a different tale is waiting to be told. The monks of the Ashen Order have established their outpost of T'Narev on the heights of one of the larger plateaus, while their dissidents, the Ashen Disciples, occupy the nearby Master's Plateau. The prophets and desert madmen can be found on top of other mesas as they climb ever upward in search of enlightenment.[1] Windsister Harpies dominate the northern skies, flocking between the Needle and all other plateaus of the region. Beneath their talons tread the Kromtorr Giants whom hold the western plateaus and are in the midst of forming a pact with the Sandscrawler Goblins whom swarm about the northeast. Both the Sandscrawlers and the Sandfury Cyclopes block all passages between the Pillars to the Sinking Sands and will likely be the first of the multitude of desert dwelling factions that you will draw swords against here.

The usual way of reaching the Pillars of Flame is to take a Magic Carpet from within the Sinking Sands to Camp D'Sas or the Undercity Arena and enter via one of the four entrances that line the western edge of the zone. There is a passage to the Pillars through the Clefts of Rujark that is quicker, however more perilous as you will have to fight though groups of Rujarkian Orcs to reach it. 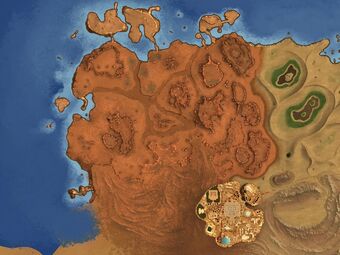 See: Pillars of Flame Timeline and Ghassan the Trader Timeline