Edit
watch 02:17
New Pokemon Games - The Loop
Do you like this video?
Play Sound

The Mystic Lake is an outdoor adventure area attached to The Village of Shin on the Isle of Mara. It is suitable for soloers and groups of levels 55-68 or so. Populated by Gunthak pirates, forest creatures, undead skeletons, drowned temples, a mountain lake, and a particularly hard glade at the far end, this densely packed zone offers a fairly large amount of content in a small area.

In times past, when the island was a bastion of knowledge, the seeds of corruption were planted. As the city of seers and scholars rose to greater heights, celestial words were interpreted. The beauty of what was once offered was defiled in erudition. The city fell.

The tome of knowledge passed through the ages, no one dared to gaze upon the words, defiled or not. The ages lived and died and a once great empire was swallowed by the island, covering much of what was with natural beauty. Then came the castaways.

Upon the shores the waves arrived, occasionally bringing gifts to an abandoned isle. Some of these gifts were seeds of new flora while others were creatures lucky enough to survive atop wayward flotsam. The creatures of the gods arrived.

- The Seeds of Corruption

The zone is neatly divided into four major areas:

The four sections of the zone are separated by dangerous passages. It is necessary to deal with aggressive monsters in each of the connecting passages, or to have invisibility or stealth. A one-way passage leads from the final area back close to the entrance.

In order to reach the dungeon The Forsaken City and the instance Nizara, City of the Nayad contained therein, it is necessary to have good swimming and breathing. The entrance is located a considerable distance under the surface of the lake. 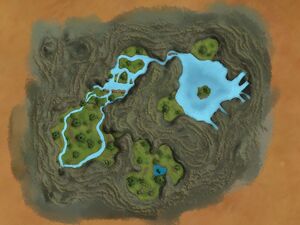 Most quests originate in the Village of Shin next door. See the Fallen Dynasty Timeline. 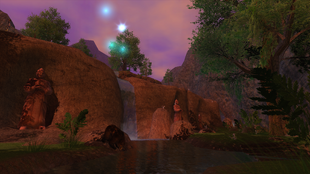 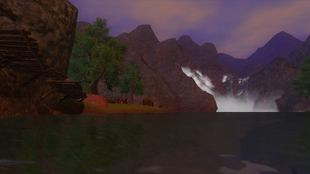 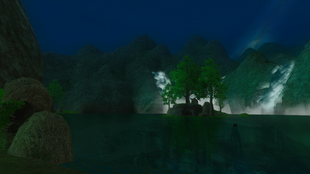