This encounter occurs at the end of the Mines of Meldrath, once all the power cells have been retrieved and the Builder Bot has constructed the bridge for you to reach the secret cave where the King's Give is stored.

The King's Gift is a non-hostile at the start and later turns into the actual boss, Meldrath the Malignant, once the ghost of Meldrath merges his soul with the gift. Because Meldrath's ghost merges with the King's Gift, the chest that drops at the end will read "of The King's Gift." 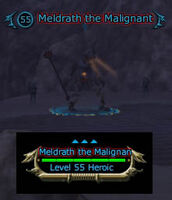 The King's Gift as merged with Meldrath.
Add a photo to this gallery

Note that the 4 helper mobs near Meldrath the Malignant are heroic^ but ARE NOT LINKED. They are, however, social with Meldrath.

See the Mines of Meldrath page for strategy on this fight (and others).

Retrieved from "https://eq2.fandom.com/wiki/The_King%27s_Gift?oldid=617068"
Community content is available under CC-BY-SA unless otherwise noted.