The Feerrott is the ancestral home of the ogres, and the remnants of their former glory can still be seen throughout the jungle as ruins. Their civilization was cannibalized and betrayed to ruin in the events of the Second Rallosian War, leaving this land to their arch-rivals, the lizardmen. During the conflict, under the orders of General Urduuk, the ogres sought the annihilation of the lizardmen. However, it would be the lizardmen, not the ogres, that would end up better off by the end of the war. The deity of the lizardmen, Cazic-Thule, came to their (and the remainder of his followers) aid when he destroyed General Urduuk's army with the Greenmist. Ever since then the lizardmen have been the sole remaining sentient race in the Feerrott and have been steadily increasing in number.

Hasten Bootstrutter best describes the heritage of the Feerrott in his field guide: "[The Feerrott is] a place filled with lush exotic beauty. This jungle has stood its ground for ages and still thrives to this day. Through the ages the children of war and the children of fear have met and vied for control of the jungle, all the while having to fend off the great dangers of the fauna and sometimes carnivorous flora. Ruins of attempted civilizations rest all about vines and roots entwined around stone, the jungle reclaiming itself. Only the tribal lizardmen have been able to maintain a long existence with this land and it is with great respect for the dangerous jungle that they still remain."

The Feerrott is a jungle with dense vegetation that hide dangers, and twisted trees that impede travel. Impassable ridges divide the zone into valleys, and force travelers to take detours. Many creatures are airborne and easily overlooked. Ruins of both the Rallosian (ogre) and lizardman civilizations are found throughout the jungle.

A network of ancient roads connect almost all valleys with each other. The roads are unsafe, but a traveller won't get lost following them. The Anaconda River and the Greenblood River follow fairly straight routes east-west and north-south, respectively, starting just outside the Hidden Camp. The rivers can be followed to cross the zone quickly, but they too contain hidden dangers.

In the middle of the zone rises the Tower of Vul, where creatures of The Void have made an incursion into the world of Norrath. Far to the east, the Gulch of Thule separates the main part of the zone from the most dangerous areas. All creatures beyond the gulch are above level 40. The lizardman stronghold of the Temple of Cazic-Thule lays beyond the gulch. In a cave beyond the temple lies a portal to the Shard of Fear, a remnant of the realm of the lizardmen's god.

Horse routes are available for travel within the Feerrott, starting at the front entrance from the Drowning Causeway, and continuing incrementally through to the back of the zone. Many impassable obstacles exist within the dense jungle that make travel on foot tedious. Follow the roads or rivers to find your way from one valley to the next. 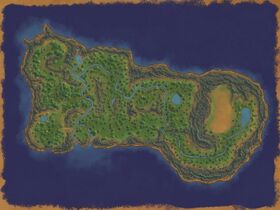 A minor town is attached to the Feerrott, but is only accessible after completing a set of access quests. Complete the Froglok Timeline to earn access to the Hidden Village of Kugup, which is located on the southern part of the Feerrott, at ( -1039, 1, 856 ) Copy/waypoint -1039, 1, 856. This instanced village has merchants but no mender.