Many citizens of both Qeynos and Freeport have been asking me lately about the Sinking Sands and various other locations in the Desert of Flames. As I am generally either journeying around with an agenda or have my nose stuck squarely in a book doing research, I had not heard anything about this mysterious land myself before it was discovered. So, I set out to divine the story behind the Desert of Flames, and have some findings to report at this time.

You see, a great barrier between the rest of the Shattered Lands and the scorching deserts existed, and it was known as the Sea of Sand. Most Norrathians of the Shattered Lands had at least heard rumors about the area, but were unsure about how to get there safely or even if safety resided beyond the Sea of Sand. A majority of the population was completely unaware that there was land within this massive perpetual storm.

The Sea of Sand is like a wall of sandstorms that races around the entire island of Ro. Any ships that dare sail into this maelstrom are soon to be sandblasted and its crew almost certainly with it. There is, however, a known passage through this anomaly.

Most claim that the first to break through the wall were the underestimated race known as the orcs. They sent reinforced ships, designed by captured gnomes, into the Sea of Sand to discover a route through the barrier. What they discovered was a piece of land within the Sea of Sand that featured a tunnel of stone, apparently impervious to the sandblasting force of the maelstrom. Some believe this tunnel was once a conduit between the Commonlands and Desert of Ro before the Shattering, although I feel that is likely a myth.

Unfortunately, this tunnel does not extend all the way through the Sea of Sand, but is just far enough that properly reinforced ships can endure the sandstorm and cross through to the Desert of Ro. Eventually, the more civilized inhabitants of Norrath became aware of this path to the desert and built ships of their own to get there.

To be prudent, I should also recommend against going near the Sea of Sand on your own. You see, it is said that the orc war machine includes a seldom-seen orc clan that maintains a persistent armada in the seas of the Shattered Lands. This clan is known as the Blackhook. The Blackhook maintain the orc shipping route to and from Ro, as well as most other shipping lanes. They were the orcs who first forged the first lane through the Sea of Sand, and don't take kindly to those who interrupt their trade route. 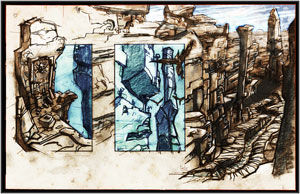 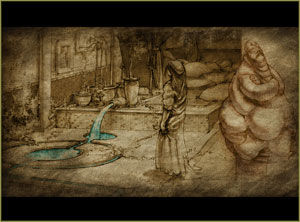 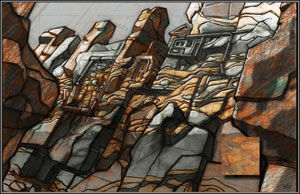 Retrieved from "https://eq2.fandom.com/wiki/The_Discovery_of_the_Desert_of_Flames?oldid=40108"
Community content is available under CC-BY-SA unless otherwise noted.