While the Commonlands appear to be just a backwater waste chosen by fate to host the great city of Freeport, with a little digging, it's past glory can still be held.

Located on the east side of the Shattered Lands upon the continent D'Lere, the region is a battle-scarred subtropical savanna. It is embraced by titanic jagged mountains called Razorrock Ridge and scattered with clumps of trees and kopjes. Many battles have been waged on these lands and orc and human ruins are common sights amidst the beautiful and deadly land.

Once this region was a haven for the Deathfist Empire orc legions. The Deathfist Empire seemingly was driven from The Commonlands during the Battle of Defiance. As of the recent decade, the orcs have begun to make a presence in the region again. What brings them back is unknown. - (Source: Official Everquest II lore)

The Commonlands are open plains and gentle hills, with almost no barriers to travel. Each large plain is dominated by specific types of creatures. Roads and streams crisscross the region and are mostly safe from danger. They can be used by players to travel undisturbed between each major section of the zone. 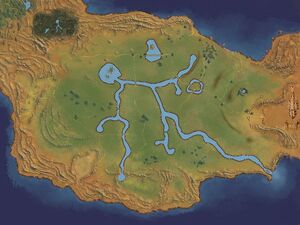