These volcanic islands, shrouded in eternal twilight, have been infested by many nightmarish creatures. Strong bands of adventurers may discover the fates of the ancient dragons, Lord Vyemm and Tarinax.

The cloud travel system was updated and all instant cloud routes are now connected, without any need to switch clouds from island to island. (with LU57)

Anyone with a flying mount can also fly between islands using a mount instead.

Like all zones in the Overrealm, the Bonemire is a set of islands floating in a void.

A safe camp is located on Drednever Crash Site, where a gnome expedition has come upon hard times. A few town services are provided here, such as a merchant and mender. 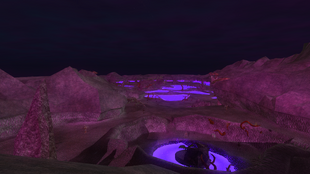 Add a photo to this gallery
Retrieved from "https://eq2.fandom.com/wiki/The_Bonemire?oldid=1022751"
Community content is available under CC-BY-SA unless otherwise noted.