These remnants of the Plane of Sky float in a void of eternal dusk. The twisted jungle islands are dominated by the Droag, humanoid servants of the dragons, but many other Plane of Sky creatures live here as well.

To gain access to Tenebrous Tangle you must use a Ulteran Spire which is located in a variety of zones.

A network of clouds allows travel between the various islands within the zone. See the map on the right for the network of in zone travel routes.

Like all zones in the Overrealm, the Tenebrous Tangle is a set of islands floating in a void. 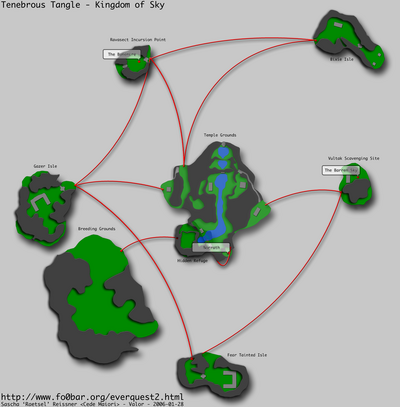