It's easiest to pick Offensive/Agility, Voidfield, and Unstable/Stalwart. It doesn't matter what order you pick them. Additionally, you may pick different choices as well varying on your capabilities. 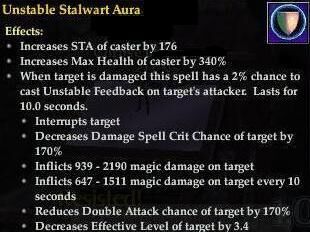 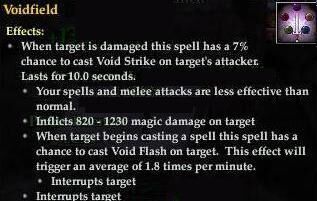 Killing Voidstorm gives the Switchmaster the ability to do a large AE knockback with heavy damage, a stun, stifle.

Once the previous 3 encounters are dead Switchmaster will immediately spawn. This guy hits like a freight train so a tank with a decent amount of critical mitigation is a plus. Switchmaster lays down a few AEs.

Exothermic Explosion(elemental) triggers As of an Update on 1/28/09 Switchmaster more reliably casts this AE every 24-30 (need exact number) seconds. It manifests on your screen as "blue vision" or "infrared".

Enthralling Flames (elemental)occurs on a relatively stable timer about every 24-30 seconds (need exact number) and is a short range AE. It has a stun and an elemental damage component.

Every so often (roughly every 15 seconds) 2 people in the raid get "yellow vision" or "sonic vision." These 2 people become colored Yellow and their entire screen turns yellow.

Within 5-15 seconds, these 2 individuals must run to the South west portal in order to be "cured" of yellow vision.

Failing to cure yellow vision results in raid wipe. Jumping into the southwest portal also causes damage to you as you hop in; be careful. Yellow vision can affect anyone in the raid.

You can alter your strat for killing and positioning switchmaster however you want. Some raids never do any tank switches when their tank gets yellow vision. You can if it works for you. The basics are this:

Throughout fight 2 people are constantly getting yellow vision, they run to southwest portal to cure it or game over.

People get deleveled 3-4 levels by doing damage to switchmaster (arcane curable). Make sure you have someone (like mages) to cure arcane on a healer that has this OR the healers have potions to cure it. The delevel makes your cure ineffective as a priest and will not remove any detriments. If the tank gets this debuff, cure it immediately.

Voidfield Proc occurs by damaging switchmaster, this is annoying. This debuff makes combat abilities and spells do 0 or 1 damage. Either have a priest curing this or just wait until it expires before firing any spells or combat abilities to avoid wasting power on them when they have no effect.

Retrieved from "https://eq2.fandom.com/wiki/Switchmaster_Zaxlyz?oldid=352465"
Community content is available under CC-BY-SA unless otherwise noted.