Edit
watch 02:53
GTA: The Criminal Enterprises - The Loop
Do you like this video?
Play Sound

The Steamfont Mountains are named for the natural geysers and springs found in its rocky peaks. It is known that the dragons had once dwelled here, for the fossilized remains of very young dragon can be viewed inside a small valley. The presence of Steamfont's drakes also indicates that the region may once have had some greater significance to the children of Veeshan. However, that history was lost long before the arrival of the elves or the surfacing of the gnomes. The gnomes claimed the Steamfont Mountains, and dug their home city of Ak'Anon out under the mountains.

During The Rending, the Gnomes lost control of the city of Ak'Anon to their clockwork servants. They currently live in an outpost located in the caldera of an extinct volcano, and work towards reclaiming their hometown. 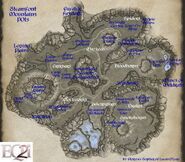 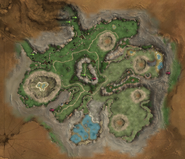 The gnomes have installed "travel discs" to help adventurers quickly navagate the zone. There are stations at Gnomeland Security Heaquarters, the pass to Greater Faydark and Butcherblock, the pass to the Loping Plains, and one in the southern part of the zone near the Steamfont Wetlands, Dragonscale Hills, and the path to Klak'Anon.

Although the gnomes were driven out of Ak'Anon, their current residence, Gnomeland Security Headquarters, has all the facilities an adventurer would need including a mailbox, a banker, a broker and a mender. Additionally, most of the quests for Steamfont and Klak'Anon can be obtained there.

In addition to the solo quest line and some heroic quests available in Gnomeland Security HQ, there are some new NPCs outside Klak'Anon gates handing out repeatable quests.

In the Southeastern region of the zone you will find a pair of quest NPC gnomes named Emory and Oglethorpe. This is a direct reference to a pair of alien characters in the TV show Aqua Teen Hunger Force. This becomes even more apparent when, during one portion of the quest, they begin speaking some of their ATHF counterpart's lines from the show verbatim! Enjoy!

In another probable Adult Swim reference, you'll find a little battle robot named Dethklok in the Gnomeland Security HQ. This is the name of the metal band in the TV show Metalocolypse.