What's the difference between a Spell and a Combat Art? Not much:

Otherwise, we can talk about Spells and Combat Arts interchangeably. For the rest of this section, we'll just call them "Spells". 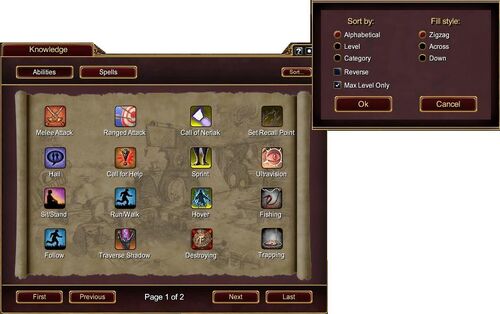 Your spells, combat arts, and crafting skills are found in your Knowledge book. Open it by pressing K. You can browse your spells in here, and sort them in various ways to make finding them easier. When you point at an icon, a tooltip will pop-up with a brief description of the spell. For more details about the spell, right-click on the icon and choose "Examine".

There are several types of spells and combat arts that you may have in your Knowledge Book. The background color of the spell's icon tells you its type.

Each time you gain a level, you learn one or more new spells. Your new spells will enter your Knowledge book automatically each time you level up; there's no need to visit a trainer to learn them. If you have empty slots on a hotkey bar on your screen, then the new spell icons will automatically be added to your hotkey bar as well. Each class learns roughly 20-30 unique spells or abilities in all. Most of them are granted early in your career, but some are introduced at later levels, or are earned by spending Achievement Points.

By level 15, you'll notice that some of your new spells are actually higher-level versions of spells that you already had. See the section below on Replacing Spells for more details about this.

You can cast your spells and arts directly from the Knowledge book, just by clicking on the icons in the book. But it's a much better idea to drag your most useful spells to your Hotbar. That way, you can cast them while your Knowledge book is closed.

You can move your Hotbars anywhere on the screen, and even change their shape, by pressing F10. You can also enlarge or shrink your Hotbars by right-clicking and choosing "Hotbar Settings".

When you click on a spell or combat art icon, it doesn't take effect instantly. Almost all spells have a casting time. Combat arts usually have short cast times, while spells have longer cast times and require you to stand still. While the spell is casting, you'll see a yellow progress bar in the middle of your screen. If a monster interrupts your casting, the progress bar flashes red and the spell begins recasting automatically (up to 3 attempts).

When you cast a spell, you'll notice that there's a cooldown timer on each. The icon goes dark, and slowly fills back up as the timer counts down. If you click an icon before it has refreshed, then the spell will be queued as your next action, and will be cast automatically when the timer expires.

You can stop casting a Spell that is in the process of casting. Either press Escape to cancel the casting, or move a few steps to interrupt your casting. (You can't stop casting a Combat Art in this manner - only Spells can be stopped in mid-cast.)

EQ2 allows you to improve most of your spells. You do this by finding spell scrolls and scribing them in your Knowledge book. Just as you might find better equipment on your adventures, sometimes you'll find scrolls that teach you a better version of your spells.

The most practical way to improve your character's performance in combat is to upgrade your spells.

You can find better versions of spells as loot in monsters' treasure chests, or you can buy spell upgrades from other players through the broker system. An Adept spell is a common upgrade, while a Master spell is a rare and precious upgrade.

The following table shows you where to find improved spell scrolls. The names of the tiers were renamed with LU52; the older names are listed below for historical purposes, and some players may still refer to the older names.

To illustrate the benefits of upgrading a spell, here is a chart for a healing spell that Templars receive at level 12, called Vital Intercession. The amount of health that's healed by this spell depends on which version you have scribed:

Gray cells correspond to unavailable ranks of the spell. Effect values for this spell are modified by the player's Wisdom.

All Templars get the Apprentice version of this spell automatically at level 12, but they can use the better versions at level 12 too - they just have to find an improved spell scroll and scribe it in their Knowledge book. The effort is in finding the right spell scroll.

Once every 10 levels, you are given an opportunity to choose mastery in a single spell. You're given a choice of four spells that you obtained in recent levels. The spell that you choose will be upgraded to Grandmaster tier, making it one of your most powerful spells. Because it becomes so powerful, you should choose mastery in a spell that you'll use frequently and that matches your playstyle.

Grandmaster is a higher rank then master, which is only granted to a few spells for free. The four choices presented to you are different each time you choose a mastery spell (once per 10 levels). Referring to our previous example, the Vital Intercession spell is offered as a mastery choice to Templars at level 14, so the Grandmaster tier of this spell is shown as being available in the spell's table.

Research is used to upgrade a spell or combat art from:

If you change what you are researching you'll be refunded one third of the days you've been working on the spell. So if you have been working 10 days on a spell you'll get 3 days back (it's rounded down) to apply to the next thing you want to research whether you are part way through the research or all finished.

In your Knowledge Book, you can sort your spells by Type; this will group related spells so you can see which ones replace others.

Buffs are beneficial spells that are persistent: they stay active when you cross zones and even when you log out. Almost all buffs in EQ2 last forever, and don't need to be recast until you die. Almost all buffs require you to group with a friend in order to share them. Buffs are shown in two windows on your game screen:

Melee classes receive special buffs called Stances. You should always have a Stance active if you're one of these classes - so make sure you select one. You'll get to choose between an Offensive Stance or a Defensive Stance, but only one of them can be active at a time. Once activated, your Stance stays active until you change it (or die).

Heroic Opportunities are combinations of spells that produce a bonus effect during combat. The bonus effect can be a buff on yourself, or a harmful effect on your enemies.

Certain classes get pets that can help you in combat. Your pet must be summoned by casting the appropriate spell. Once it's been summoned, your pet follows you on your adventures, and helps you in combat. The Pet Window appears on your screen, giving you a good view of your pet's Health and Power, and some hotkeys that help you to control your pet. For details on how to control your pet, see the Combat Mechanics guide.

Among the pet classes, there is some variety as to the types of pets. Let's take a quick survey of them. (This isn't meant to be an exhaustive list, it's just an overview.)

Since your pet is an integral part of your class, getting a better pet is hugely important for your combat performance. Each time you gain a level and receive a new pet spell, your first priority should be to upgrade the pet spell - ahead of any other equipment or spell upgrades.

As a rule of thumb:

For those who charm creatures, upgrading your charm spell will significantly reduce the rate at which the monsters break your charm spell and increase the damage the creature does. This may make it feasible for you to charm higher-level creatures, who will perform better on your behalf.