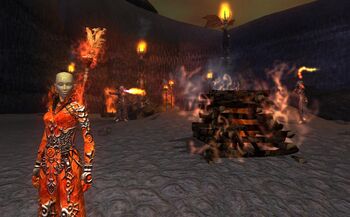 Scorched Sky is the live event that begins in late June. While in-game, click on the EQ2 radial button and choose the Calendar to check the exact dates. It was first introduced to EQ2 in 2018.

Devotees of Fennin Ro and his son, Solusek Ro are celebrating the cleansing and tempering power of flame in various locations. Players will receive an in-game mail inviting them to test their skills against flame-themed creatures. See the first official announcement for more lore in the History section below.

This event will appear on all non-TLE servers in various locations. See the sections below for location details.

Free Mount for Members in 2019Edit

Anyone with a paid membership can get a free flame-themed flying carpet mount for each of their characters. To find the Flame-Branded Hamadan and "buy" it for zero Daybreak cash: open the Marketplace window, open the section for Mounts, click on the Flier tab and locate the carpet listed for free. Note that if your character's level is too low you need will to uncheck the Hide Unusable box at the bottom of the Marketplace window in order to see the Fliers section.

This event is a little irregular in the way quests are started, so this section provides very basic details. Please see the actual Quests and Collections sections for more details.

Because this has some event has quirks (as of 2019), players should note the following:

The following locations have both the merchant and some flame-themed enemies for you to battle and defeat. Only one location (as of 2019) has an NPC that offers an additional quest: Darklight Wood.

In addition to the suggested location above, players might seek or encounter celebrations at the following locations.

Visit at least three of the above locations to complete the event collection. See the Collection section below for details.

Ember Merchant are located among the Devotee of Flame celebrants. See the Locations section above for their waypoints. This merchant has all of the event merchandise.

A Sparkler Merchant can be found in all of the player cities. They sell limited items because they were once the only NPCs on TLE servers. Though those TLE servers were merged and the event is not yet on the remaining TLE server, these NPCs remain on all servers that have the event as of 2019.

A mount, several Building Blocks, pets, Appearance armor and more can be purchased with the event currency.

Though you'll get some Coin of Ember from the quests, you can earn more by engaging in combat with the fire-themed MOBs that can be found around the celebrants. The enemies will scale to the character's level.

The following can be repeated as often as one likes any time the event is live:

Once a year players can complete the following:

Shinies will are in the general vicinity of the celebrations in the various zones.

The event collection, Corilac Gem Stones , is comprised of nine collectibles. The collection can only be completed by visiting at least three of the nine event locations. In these locations, players can locate any of the three potential "shinies" found there.

Below, the collectibles are grouped by the event locations they can be found in, with notes about possible locations within each zone.

In Darklight, near Sableflame Crater and Smoldering Lake. In Sinking Sands, near the druid ring and on the southern beach. In Tranquil seas, near South Dshinn near Lobha Peaks.

The Commonlands, Great Divide, The Pillars of FlameEdit

In Commonlands, near Dog Trapper Lake. In Great divide, near Scar Bridge South. In Pillars, near Siyamak (by the NPCs near the shore).

In Antonica, in Windstalker Village. In Butcherblock, near the Griffon station above the docks. In Lavastorm, near the mount station by Dragon's Breath Tunnel

Killing 25 fire elementals near the celebration sites gives the Achievement Tempered by Flame.

The following announcement summarized the event as such:

The Scorched Sky Celebration has begun, and worshipers of Fennin Ro and his son, Solusek Ro, can be found celebrating their gods across all of Norrath! During this special celebration, the devotees of Flame are offering a chance for all to rejoice in the primal power of Fire and Flame, with no grudge towards those who have embraced other deities. They believe that within the flames all mettle is tempered, both literally and figuratively. That which is weak, distracting, and fleeting will be burned away in battles against fire elementals, leaving only the strong, pure, and resilient.

Retrieved from "https://eq2.fandom.com/wiki/Scorched_Sky?oldid=986300"
Community content is available under CC-BY-SA unless otherwise noted.