At best dynastic and at worst nepotistic, the ancient lineage of the royal family of the City of Qeynos is intertwined with the history of Norrath.

Qeynos has been ruled by the Bayle family line for over 1,000 years. The direct lineage of the progenitor can be traced to Bayle Shiverfist, a post-Barbarian Human of Halasian descent. It is known that Bayle dropped the use of his clan name - Shiverfist - as was the tradition of Humans at the time, and consequently we know him as "Bayle" or as "Bayle the Ethernaut." His line is shown in the genealogical image below in blue, tracing the firstborn son lineage to where it is lost, at the unknown fate of Kyle Bayle, the rightful firstborn son and heir to the throne of Antonius Bayle III.

The only surviving direct line, through the second-born son of Antonius Bayle III, is that of the firstborn child Shaonia, heir to the throne of Antonius Bayle IV. This is the line that exists in contemporary EverQuest II rule in the city of Qeynos. Though Shaonia continued to reside on The Isle of Erollisi with her mother Lady Shae of Felwithe (and later, briefly, her father, who joined them there prior to his untimely death), she remained the direct heir to the throne. This line is shown in green, and is the line to which renowned and "current" ruler Antonia Bayle can trace her ancestry.

Separated from Lady Shae and compelled to marry, Antonius IV gave in to the pressure of The Circle of Five and took a wife, giving rise to the "Alternative" line, specifically having fathered twins by his second partner and only public wife. The infamous twins, less than quality characters, gave rise to a substantive if not fully authentic line of Bayles, ending with the childless death of Antonius Bayle VII. This line is shown in gold.

Finally, as if the Bayle lineage were not colorful enough, we find a third child of Antonius Bayle III and Linnett Bayle, the treasonous Kane Bayle, who rose to become Captain of the Guard and would ultimately fall in league with the Bloodsaber cult and attempt to overthrow his brother as ruler of Qeynos, leading to his conviction and execution. His line is shown in red. 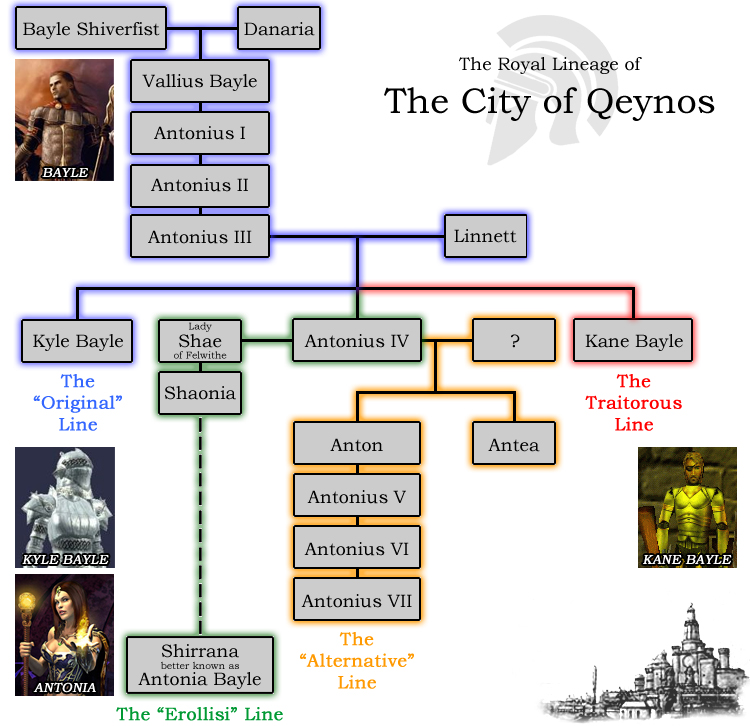 Retrieved from "https://eq2.fandom.com/wiki/Qeynos_Rulers?oldid=611886"
Community content is available under CC-BY-SA unless otherwise noted.