The Overseer Feature was introduced with the Blood of Luclin expansion to allow a player to "recruit and send agents to do your bidding and earn rewards!"

Depending on which version of the Blood of Luclin Expansion one purchases, different Overseer Starter Packs will be available via /claim. Claim the packs you have available, noting that some are "One Per Character" while others are single claim only. It's probably best to concentrate the single claim items on the toon you will be playing most often.

NOTE: "An Overseer's First Agents" can also be obtained from Maesy Colmiter in Sanctus Seru. 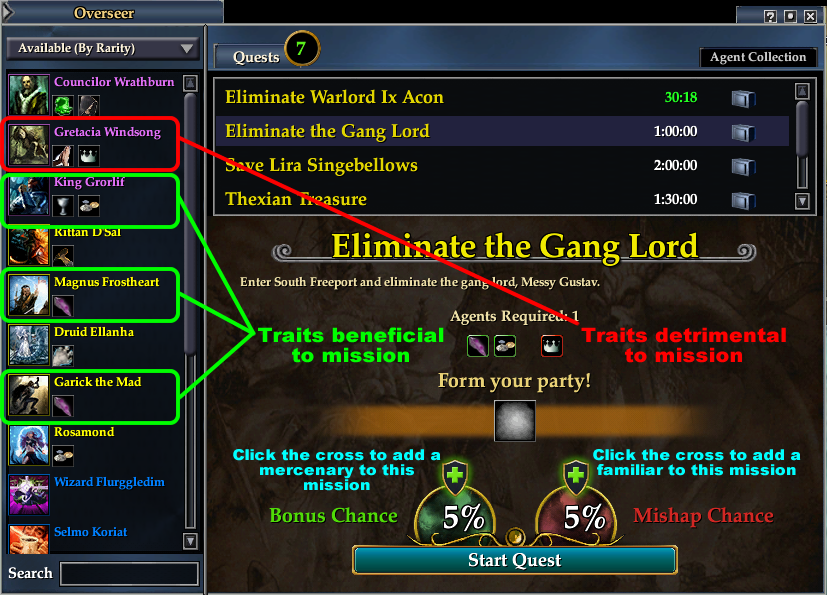 As you progress to completing more Overseer Missions, you will gain more options to help you control how successful the mission may be.

Legendary, Fabled, and Celestial Agents will have special Traits. These are displayed as icons beside each agent in the Agent List. You can hover over the icons to get a tooltip telling you what that Trait is.

In the Overseer Mission Details, under Agents Required there may be some Traits shown either with a green border or with a red border. Green-bordered Traits are those which are beneficial to this Mission, and which may increase your chance of a bonus reward. Red-bordered Traits are detrimental to this Mission and will increase your chance of having a Mishap.

To get the best results, you will want to select Agents that have beneficial Traits for this Mission (i.e., Traits that match the green-bordered Traits in the Mission window). If you do not have an Agent that has an appropriate Trait, you may select a different Agent, including agents that have no Traits. You will probably want to avoid using an Agent for this Mission that has one or more Traits that match the red-bordered Traits in the Mission window, as they will decrease your chance of success.

Some Agent Traits look really similar (there are two that have sword icons, for example), so you want to double-check to be certain you have the Agent with the desired Trait.

NOTE2: The patch on 01/23/2020 changed a bunch of the Trait icons to very difficult to resolve images. Waiting to see if DBG will revert the change or change to easier to see icons before changing the images here.

To further increase your Bonus Chance, click the small shield with the green cross. This will allow you to select a Mercenary from your collection. These must be Mercenaries for whom you have unlocked the Hire Anywhere ability.

At the bottom of the Mission window on the right is Mishap Chance. This is the chance the Mission may fail, meaning that you get no reward, and the Agent(s) that were assigned to this Mission will suffer a Mishap. Selecting Agents with detrimental Traits for the mission can make a Mishap more likely.

To reduce your Mishap Chance, click the small shield with the green cross. This will allow you to select a Familiar from your collection. Different Familiars will have more effect in lowering your Mishap Chance.

You can have many more Missions than you will be allowed to see in any given day (Mishaps are a little different). The server pushes down up to seven Missions daily. Unless you have a Mishap mission, that's all you get for that day, so you may need to re-run a few missions to get in the ten total you are allowed daily.

If you second-guess and decide to cancel a Mission so that you can assign different Agent(s), the canceled Mission still counts against your 10-per-day total, and if you reassign Agent(s) and start that same Mission again, it counts as if it were a new Mission.

Mishap Missions occur when the RNG roll and your Mishap Chance collide. If a Mishap occurs, the server will assign a Mishap Mission to you. If you sort the Agent List by Mishap, Agents benched due to Mishaps will appear, and may be used as the rescuee in a Mishap Mission. Even though Mishap Missions have long timers, they don't offer rewards similar to regular long-timer Missions. However, you should get your captured agent back when the quest completes (unless there's another mishap).

Retrieved from "https://eq2.fandom.com/wiki/Overseer_Feature?oldid=1024016"
Community content is available under CC-BY-SA unless otherwise noted.