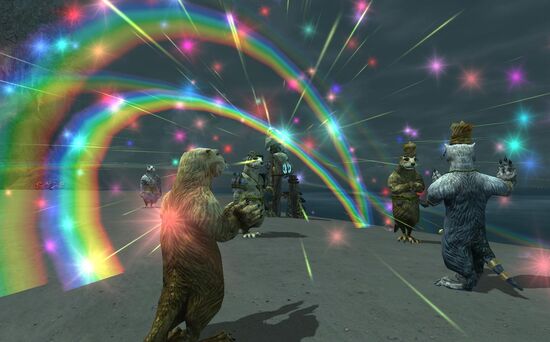 Oceansfull Festival is the Live Event that begins in Early June. While in-game, click on the EQ2 radial button and choose the Calendar to check the exact dates. It was first introduced to EQ2 in 2018.

For generations, the othmir have been giving thanks to Prexus at during the early summer months each year for all he provides, above and beneath the waves. It is a celebration of all things Prexus, ocean, and sailing. Although this began as an othmir celebration, pirates, sailors, fishermen, and other ocean-folk have caught on quickly, joining in the reverie and praising the Ocean Lord. Now, they have decided to expand the festivities even further and have decided to open the celebration to all of Norrath and anyone who may want to join in on the festivities!

The event will take place on all regular servers.

This event does not have any merchants as of 2019.

Players can find and open clam shells at any of these locations. See the Collections section for details about "shinies" found in specific locations.

Find clam shells off shore in any of the areas where Oceansfull is being celebrated and open them up for rewards! You never know what you may find when you pry open a gift from Prexus.

Players will randomly receive a variety of items when opening shells.

Opening 25 clam shells completes the Achievement Clam Shell Game "you never know what you my find when you pry open agift from Prexus!" and rewards you with prefix title Shell Raiser

The event collection, Sacraments of the Deep, is comprised of nine collectibles. The collection can only be completed by visiting at least three of the eleven event locations. In these locations, players can locate any of the three potential "shinies" found there.

Below, the collectibles are grouped by the event locations they can be found in.

At this time, this event has no retired quests, but should that change in the future, please move retired quests to this section.

Retrieved from "https://eq2.fandom.com/wiki/Oceansfull_Festival?oldid=1052778"
Community content is available under CC-BY-SA unless otherwise noted.