She came from a long line of builders. Her parents were both builders as were their parents and their parents before them. Strong and sturdy, the dwarves knew how stones fit together, how the land reacted to removing this boulder or that outcropping.

"The land your parents built was different, Maggie" said the foreman. "I heard the stories, too, but look around you. The lands are shattered. Splintered."

Maggie ground her teeth together. She had heard these arguments before and knew that she would hear them again.

"The lands may be different," she said, "but the stones themselves are the same. They fit together the same way they used to, or have you forgotten the basics?"

The foreman bristled, throwing back his shoulders defiantly. "I've not forgotten."

Nodding, Maggie unfurled the drawings again on the low table. "We need to build these towers to replace what was lost in the Rending. Our parents used to walk across the lands but we haven't that choice now."

"We can stay right where we are, no need to go traipsing about to find adventure!" he responded, quickly glancing at the plans spread before them. He didn't want to become involved, but it was in his blood. Construction plans always drew his attention.

"We could just dig ourselves under the ground and hide like frightened babes," Maggie retorted, smoothing out the paper and weighing the corners with small rocks. She hid her smile, knowing that he couldn't help but stare at the drawings. Things were going exactly the way she'd planned.

"I never said we were scared," the foreman growled. He jabbed a finger at the paper, "Why a platform like that? Made of wood. At least it's thick timber you're wanting. And the base is of stone. Granite, is it? Or basalt?"

"The base needs to be strong to carry the load, as you can see," Maggie explained, shifting the paper so he could get a better look without twisting completely around. "Basalt for the base where we can get it., though we'll need to be open to what we can get locally. As for the wood, it's for the height. We need to fly."

"You'll be wanting gnomes for that," the foreman snorted, but from the interested way he was inspecting the drawings, Maggie knew she'd won him over.

Her idea was simple: construct towers like the ones that provided quick transport in Antonica or the Commonlands in outlying areas. Those towers had been built through dwarven efforts and so it was fitting that the new towers would likewise draw from their inherent strengths, both physical and architectural.

"This won't be easy," the foreman said, pulling at his beard. "I see on the maps where you want them; those areas are treacherous. We're builders, Maggie, not fighters."

"I know. We'll have to recruit help, but it'll be worth it," Maggie replied, rolling up the drawings and binding them with thin leather straps. "Your men are the best at their jobs, that's why I need you."

The foreman stretched again, stretching his arms out and slowly turning them this way and that, inspecting them as though he had never seen them before. His hands were rough and calloused from years of working with iron and stone. There were scars running along one arm from that time the orcs had nearly severed it in an attack. But beneath his skin, muscles flexed and anticipation grew.

"Aye," he said finally. "We'll do our jobs. Just you find us suppliers and hire a protection crew. Your towers'll be finer than what folks might expect." "They'll be like us," Maggie said with a smile. "Strong and built to last." 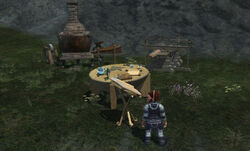 Retrieved from "https://eq2.fandom.com/wiki/New_Griffon_Towers?oldid=40107"
Community content is available under CC-BY-SA unless otherwise noted.