Together with Darklight Wood, Nektulos Forest forms the ancestral home of the Teir'Dal. Agents of Freeport, Neriak and The Thexians are in a tense race to reclaim this wild and shrouded forest. Remains of the old Dark Elf empire, the Thex Empire, are found dotting the terrain. Pirates, fairies, twisted treants, and undead are just a few of the dangers lurking within.

With the reopening of sea travel between the Shattered Lands in recent years, Nektulos Forest has become a major travel hub. The dock at Port Naythex sees regular ship traffic, providing easy sea travel throughout the central region of Norrath.

Nektulos Forest once acted as the primary foothold of the Thex Empire, Neriak, and dark elvendom on Norrath. To this day, every major structure found adorning the zone is of Tier'Dal design. Dark elf dragoons, living and dead, can still be found in great numbers defending the land. Additionally, The Thexians, in their aim to return the Tier'Dal to their traditional ways, seek to control the area.

The dark elves have waged constant battles in Nektulos, yet they struggled to ever fully master her. As part of their warrior training, the dragoons would have to survive the natural dangers of the Forest. Generation upon generation of dark elves would rise in rank through battle and by triumph over perils of the Forest. Yet through all this, the Tier'Dal would never learn how to thwart every danger the Forest threw at them; as if Nektulos herself never desired their protection.

Before The Age of Cataclysms, Nektulos Forest was directly bordered by the Lavastorm Mountains. However, during the geologic disturbances of The Rending, the mountain range began to violently drift away, spewing volcanic ash into the atmosphere. Nektulos' proximity to Lavastorm bore it ill fate and the Forest was forever doomed to be coated in a thick layer of ash. For this reason, while adventuring in Nektulos, it is easy to lose the time of day as both sunlight and moonlight refract against the thick ash, distorting all light. Rulinthus, an ancient and friendly treant encountered during the quest The Gates of Cauldron Hollow, states that Nektulos "was once grand and hospitable, [but] has been tormented and twisted into something grotesque and ungracious." He continues to say, "The mounts of flame spewed forth from many leagues away...a curse floats amidst the veil of ash." The all-encompassing ash, the 'curse' mentioned by one of the Forest's oldest inhabitants and an innate unwillingness to cooperate with a sentient race that has occupied its lands for centuries hint of a jealous and intoxicating element to Nektulos.

In the south-central part of the zone lies Behemoth Pond. Along its northern bank lies the the skeleton of a behemoth. In current times, behemoth can only be found deep underwater, however in the past the progenitor to the modern day behemoth, referred to also as just 'a behemoth', had a completely different form and could walk upright. Professor Romiak Jusathorn in his study on behemoth, The Lore of Fauna: The Behemoth, holds that "their existence is a gift of nature...sprung from necessity." Further along, "...the behemoths acted as cleansers or exterminators to the world, mother Norrath's ultimate guardians." From these words we learn that at one point in ancient history, Nektulos Forest, as part of the living Norrath, sprung a behemoth into existence in order to defend herself.

Mathra, at the conclusion of the quest, Furious Flora, believes she has discovered the reason behind Nektulos' extraordinary abilities. She found out that the plants in Nektulos Forest have a collective consciousness that form a single entity and even a mind. From the following quest, Reagents for Mathra: "The forest, it is alive and it...hates. It hates...everything. The forest's mind is not new. It is old and has been dormant for a very long time but is now awakening...The forest has emotions, hate being most prominent. It especially hates intruders and outsiders, which it feels we all are. But the emotion I sense that worries me is that it is almost joyous over something." Not only is Nektulos a conscious being, but an emotional one as well. Be on your guard adventurer: your greatest enemy is all around you. 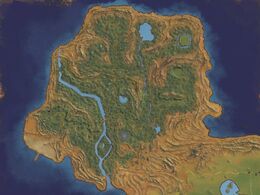 A network of griffin towers eases travel between many parts of the zone. In the past, it was necessary to complete a quest to use the stations. Starting in 2010, the quest is optional, but can still be completed by cautious adventurers of any level.

The underground village of Haven is accessed from within this zone. This town is only accessible to those who have betrayed their cities and been forced into exile. The entrance to Haven is a sewer hatch at: ( -344, 0, -784 ) Copy/waypoint -344, 0, -784

Nektulos Forest is located on the subcontinent of D'Lere. Darklight Wood connects with Nektulos to form a larger forest and its timeline echoes many of the same themes as Nektulos Forest.

Bloodline Chronicles is an adventure pack that was originally sold as a separate add-on, but has been included for free with Rise of Kunark and The Shadow Odyssey expansions. The following dungeons/instances are available to those who own the adventure pack:

Two main quest hubs are located at Port Naythex and at J'Rais Bridge. These hubs also happen to have griffon towers. Through these quests, you will assist the competing agents of Freeport and Neriak as they explore and reclaim the forest.

The Bloodline Chronicles series of quests begin at two camps at Soul Eater Falls. Their quests take place entirely within the dungeons located nearby. Through these quests, you will learn the fate of the vampires of Nektulos Forest.

Nektulos Forest has seen several revamps since release. Here are the most noteworthy changes: