EverQuest 2 Wiki
Register
Don't have an account?
Sign In
Advertisement
in: Locations with a missing coordinate, ZAM Credits, SOE/DBG Credits,
and 3 more

On this page, you will find a list of various types of mercenaries and minimal, very generalized details about how to obtain them. This page is intended as a quick-access list.

The following pages may better answer other questions about this topic:

These are the easy-to-hire mercenaries that were introduced when the mercenary feature launched with Age of Discovery. Though each city has its own unique mercenaries, players of the opposite alignment can sneak into cities and hire the mercenaries found there. For example, a Paladin could sneak into Freeport and hire Stamper Jeralf. After doing so, you can rehire them in the Rogues Gallery in the city aligned with your character. 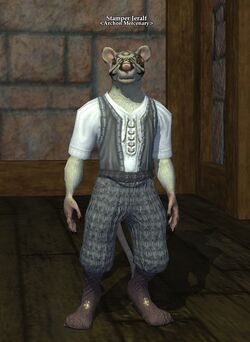 The "Elite" mercenaries were (when introduced) more expensive to run and more powerful than ordinary mercs. They cost 50g upkeep every 30 minutes (at level 90-95). All their spells are mastered.

Their most notable feature however is that they do not stand in a regular hire location; instead spawning randomly at one of multiple possible spawn locations in their "home" zone (see the table below). To hire them you first have to find them, and if someone else has hired them recently they will not be hireable at all until re-spawn (generally within a day). Moreover, if you dismiss an elite merc that you have not unlocked to "hire anywhere" you will need to hunt it down all over again if you wish to re-hire. Reported locations for the three elite mercenaries in the game can be found on their individual pages, and on EQ2maps.

To hire an "Ancient" Mercenary, you must be able to:

Ancient Mercenaries cost 25g upkeep every 30 minutes (at level 90), and offer bonuses when used within Skyshrine.

These mercenaries are hired by obtaining their contract (token) (usually as a drop from heroic mobs, or in some cases as a claim item), then consuming the token, then going and finding it somewhere in it home zone. Note that these mercs are typically not even visible until the token is consumed. Their hire locations are fixed (so once found, you can simply return to that location to rehire), though not always very convenient.

Currently new mercenaries are released with every expansion.

Hireable after you loot their respective (coins/contracts) from a heroic Chains of Eternity instance.

The following are available after looting and examining their respective tokens, dropped in Altar of Malice instances:

The Siege of Zek[]

In order to hire these mercenaries players must complete

These Mercenaries are only available for initial hire during the respective Live Events.

Hireable in the Mercenary Den of each city after you complete [What quest is needed to unlock this mercenary?] during Bristlebane Day.

These Mercenaries are/were unlocked either during special events or by buying (special editions of) expansions.

Claim an item with the /claim command and use it to unlock. You can recruit them in the Mercenary Den.

Available as a /claim item only for those who attended SOE Live 2012.

This type of mercenary are one per character, per account that purchased the expansion. The Collector's Edition mercenaries have significantly higher stats and confidence than the standard mercenaries (they can take a lot more of a challenge before they cower/debuff).

The Collector's Edition mercenaries will cost the same to hire as the standard mercenaries.

Available only for those who purchased the Chains of Eternity Collectors Edition.

You can choose either the Templar or the Paladin Lujien (werewolf) in Freeport or Qeynos mercenary dens. They will both be available for you to hire on all your characters.

Available as a /claim item only for those who have purchased the Tears of Veeshan expansion. Note: Daeron will appear in the Mercenary Den of each city only after you activate the token in your inventory that appears upon claiming it.

Available as a /claim item only for those who have purchased the Collector's Edition or Premium Edition of the Terrors of Thalumbra expansion. Note: Delidrae will appear in the Mercenary Den of each city only after you activate the token in your inventory that appears upon claiming it. This mercenary uses Wizard-like and Brigand-like abilities as well as having some healing potential.

Available as a /claim item only for those who have purchased the Collector's Edition or Premium Edition of the Kunark Ascending expansion.

These mercenaries are from the Marketplace. The instance is a bit maze like, so see the Rogues Gallery page for information on these mercenaries, along with which floor each of these can be found on. See the Mercenary Crates page for details about redeeming and selling this type (even if you have a single mercenary token).

See the official announcement about the changes.

During the annual Frostfell world event (in 2015), themed mercenaries were offered. All look like gingerbread men. Most are archon mercenaries, with one rare archeon, and an ultra rare martial mercenary.

These Mercenaries are found by entering a door within the Rogues Gallery. The door to access these looks like a Magic Door to the Guild Hall.

Please confirm and create a table as needed for the info below and remove this note. Added for names and locs while still available!

12 Days of Frostfell mercenaries (all three can be found in the gingerbread house, basement)

Two mercs per zone theme (plane), chest drops from heroic end bosses. Interestingly, all the mercenaries below(except Bhoohghar) can be hired at the NW side in Coliseum of Valor, just next to the ascension trainer.

All rare drops from Heroic end bosses (Normal?/Expert/Frenzied?). 'Rarity' is a bit misleading here, using the term 'Tier' instead. Will normally require tons of runs to get the tokens for them. All tradeable on Broker.

All Blood of Luclin mercenaries that have been "unlocked to hire anywhere" grant a persistent "Mercenary Battalion" buff even when suspended.

All Reign of Shadows mercenaries that have been "unlocked to hire anywhere" grant a persistent "Mercenary Battalion" buff even when suspended.