Blessed by Solusek Ro, Lavastorm is a land riddled with ash and flame. Fearsome drakota, spirits of pure flame and void beasts of unimaginable power teem within the fiery earth. All throughout the zone lava and debris ooze through every crevice, making any unprepared adventure here come to an abrubt and painful end. The Order of Flame and the Sootfoot Goblins are the only two groups that may offer some guidance in this unforgiving land.

Lavastorm is a land of unrelenting volcanic activity. One look upon this island and one can clearly see it is a hellish environment that a weary soul could never hope to survive in. The heat in the air of Lavastorm is nearly unbearable, and the torrid coastal waters boil menacingly. Ash and magma billow from unpredictable vents, spewing darkness and fear from the very depths of the earth. For anything to survive in this harsh environment is astonishing, which speaks of the potential threat and power of Lavastorm's indigenous creatures.

This violent island was scene to great magical battles, so they say. It is said that this was the site of a great battle between drakota and fire giants. The drakota, as it is told, sought entrance to Nagafen's Lair to destroy him. It was on these magmatic steppes that a legendary dark elf sorceress known as Najena made a pact with Nagafen and the fire giants. She employed the help of the titanic elven golem, Magolemus, to help repel the drakota from Lavastorm.

The horns of battle are silent now, but the remnants of this conflict and citadels lost to the ages hide somewhere within the dark clefts of this brutal territory. - (Source: Official EverQuest II Lore)

The island of Lavastorm is comprised of a series of small volcanoes surrounding the greatest volcano on the face of Norrath: Mount Solusek. The land is like a great spiral staircase leading to Mount Solusek at its core. Steep volcanic mountains and sweltering rivers of lava form a natural barrier to the steppes of this spiraling staircase. - (Source: Official EverQuest II Lore)

Teleportation disks at the following locations must be stepped on first to unlock them. Once unlocked, they are a faster means of travel than the harnessed lava spirits listed above. Stepping onto one of these disks for the first time provides AA experience. 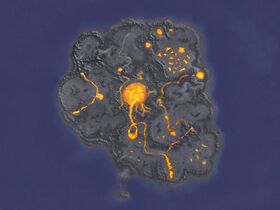