Although Ak'Anon did not suffer greatly during The Shattering and The Rending, the gnomes still abandoned it for reasons never actually explained. In their absence, the clockworks continued to run, maintaining the city and keeping up their numbers. Gradually, they became aware that they did not require the gnomes at all, and set about making Ak'Anon self-sufficient. They improved many of the machines the gnomes had made, excavated many new areas, and changed others. For example, they destroyed the Ak'Anon Library and turned it into The Mechanamagica Retrofitting. The clockworks renamed the city after themselves, calling it Klak'Anon.

When the gnomes first attempted to return, they were violently rebuffed by the clockworks. Now, while the gnomes wait outside and scheme to retake their ancestral home, the clockworks scheme from within, planning to expand throughout the Steamfont Mountains, and possibly all of Norrath.

The only way in or out of Klak'Anon is through the front gate, and mounted travel is impossible within the zone. 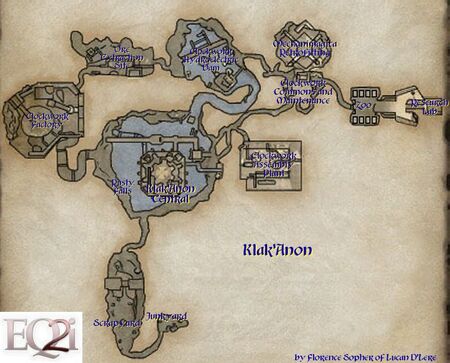 Klak'Anon does not have its own timelime, but several questlines from Steamfont Mountains take adventurers into Klak. Additionally, some gnomes have made camp right outside the doors to Klak, offering repeatable quests.

Retrieved from "https://eq2.fandom.com/wiki/Klak%27Anon?oldid=1050030"
Community content is available under CC-BY-SA unless otherwise noted.