Edit
watch 02:53
GTA: The Criminal Enterprises - The Loop
Do you like this video?
Play Sound

There are currently no restrictions if your account type is not a paid subscription.

Throughout your travels in Norrath you will acquire many valuable artifacts and treasures. The bank is one place you can store these valuables. Similar storage, called a house vault, is available in player housing.

To access the bank, you need locate and click on a banker NPC. Bankers will only interact with you if you are of the same alignment. In other words, if your character is from an "evil" city like Neriak, the banker with a "good" alignment (like the one in New Halas) will not acknowledge you.

Your character's personal bank has 12 slots for item storage (only accessible by a single character as well as, an additional 8 slots in a "shared bank" that can be accessed by any character you create.

To move items from your character's inventory you drag and drop them where you'd like to keep them. A similar process works for depositing coin and you can even deposit it in increments (plat vs. gold, etc.)


To transfer coin:
(This process can be used for the all bank types - personal and only for that character, shared between your characters, or the guild bank. It's the same process that can be used with the Trade window, when you exchange good with other players)

An image below shows the coin-split process

Player housing has a similar feature, known as a house vault or vault. Once you own at least one house, you can open it by right clicking on the door of the house while you're inside. Like the bank, you can drag and drop Strong Boxes or Backpacks into each of the slots to expand the storage. As long as you are in a house that you own or in one you've been granted Trustee access to by another character, you can open your vault at anytime. It can only be used by a single character who owns at least one house and only on the server that character exists on. It can be used to store any items you own, but it can't be used to store or split normal currency (gold, silver, etc.).

The guild bank is one of the many perks of being in a Guild. It can be accessed from any banker who will interact with you in the world.

To access your guild bank you simply right click on a banker NPC and select Guild Bank.

Shown here: the personal bank opened with a backpack open in one of the personal bank slots. On the right, the character sheet during the process of dragging coin to deposit it in the bank. For descriptions of both, see the section above, titled Personal Bank.

The following image has been altered and labeled for the purpose of explanation. 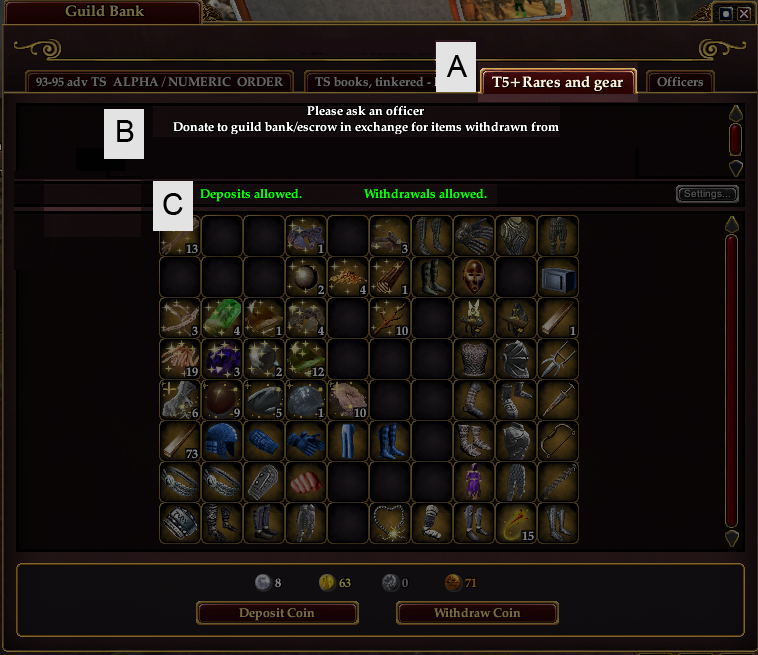