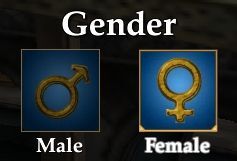 Gender in EQ2 has NO effect on your character's performance or actions.

Some % codes exist, for use in commands, or just general chat, that auto-adjust pronouns based on target's gender, making call outs with prose a little more correct.

Tailors get a few of pieces of colored fashion armor each tier, that takes the form of a dress for females, and a vest+pants for males, as does some city-faction bought items. A small selection of gender locked appearance armor does exist, but is not common to exist, and often very "old world", created before the changes to allow armor to adapt based on wearer's gender.