What does this information mean?
NOTE:

Though the Frostfell annual world event first came to Norrath in 2005, the village is a zone that was created for the 2006 Frostfell event and updated in 2008. The zone had a complete "makeover" in 2013. The layout of the zone is like the aqua goblin area of Everfrost, with rainbow bridges connecting the islands of ice. Prior to 2008, the islands were surrounded by water that you could swim around in. For the 2008 festivities and onward, the water has been frozen.

Santa Glug hands out daily presents to players (every 24 real-world hours) in this zone during the event. Guilds with the Guild Strategist amenity often plant their "raid flags" near Santa Glug or near the entrance to the seasonal version of The Icy Keep zone.

There are buckets of snowballs spread around that players can pick up and lob at each other. The snowballs remain useful year 'round, so you can pelt your friends with them in July if you choose!

A single purple "shiny" collection is available during this event. The shinies appear on the ice. See the Frost-bitten Toes page for a list of collectible toes.

You can enter the village by clicking on a magic wardrobe in any city which shares your alignment.

Each major city has an entrance to the Village that appears once the event is live:

There are two types of adventure quests one can get during Frostfell: solo and group. The vast majority are solo quests found all over the island.

One solo adventure quest is for the Icy Keep, but players can also form groups and take on a more challenging (and more rewarding) version of the Icy Keep quest.

See the main Frostfell page for a list of quests.

Over the years, a variety of crafting activities and quests have been added. This section is to help those unfamiliar gain an understanding of how Frostfell crafting is different from normal tradeskill tasks and quests. See the general Frostfell page for a list of tradeskill quests.

Anyone who has at least Artisan level 2 can buy recipe scrolls with standard currency during the event and make numerous Frostefell-themed items. Though the recipes may hint that they are ideal for specific tradeskill classes, anyone of any tradeskill can scribe the recipes and make items in them.

While you are lower level in a tradeskill though, some recipes for which you have minimal skills may be harder for you to complete successfully. As you gain levels though, this difficulty all but vanishes.

Don't fret if you have minimal skills; the daily Frostfell crafting quest is a great way to level up any tradeskill, as each combine counts as the completion of a quest, which grants greater XP than randomly crafting items. See the main Frostfell for details.

Recipes follow a general pattern for the types of items you will find in them. This is not a comprehensive list, but a way to recall which scrolls you may want to buy. The pattern is:

Recipes can be crafted on islands with crafting stations. All recipes use components harvested from presents which spawn in the zone and a special Frostfell-only fuel. There are over 65 possible component harvestables, so you may need to trade or buy them using a broker to get the specific materials you need. The fuel vendors located near the crafting areas sell the recipe books.

As of in 2013, players can make crafted Frostfell items year-round by crafting keys that unlock chests with the special holiday-themed tradeskill tables. For more info on how to get the recipes and make the specialized tables see Frostfell Crafting Stations.

Though the player made holiday tables can be used year-round, the materials and fuel needed to make Frostfell items are only from the zone, so stock up while the event is live! The fuel needed from the Village is: Elven Magic, Holiday Cheer, and Holiday Spirit.

Presents are the equivalent of harvest nodes in Frostfell Wonderland village. Those who have completed the full A Gathering Obsession Timeline to get the upgraded, Artisan's Fully Trained Pack Pony ability can summon it and send it out to gather seasonal harvests during this event.

When harvesting, it is important to recognize which "Presents" you are harvesting from. There are three types of presents and they correspond to each tradeskill station. This can help you a lot when crafting specific items.

The following crafting resources are harvested from stacks of wrapped packages in Frostfell Wonderland Village for Frostfell recipe crafting.

Only a few of the normal city amenities are available in the zone.

A highly detailed version of this map, which includes locations of quest givers, craft stations, and more can also be seen on the New Wonderland Village page. 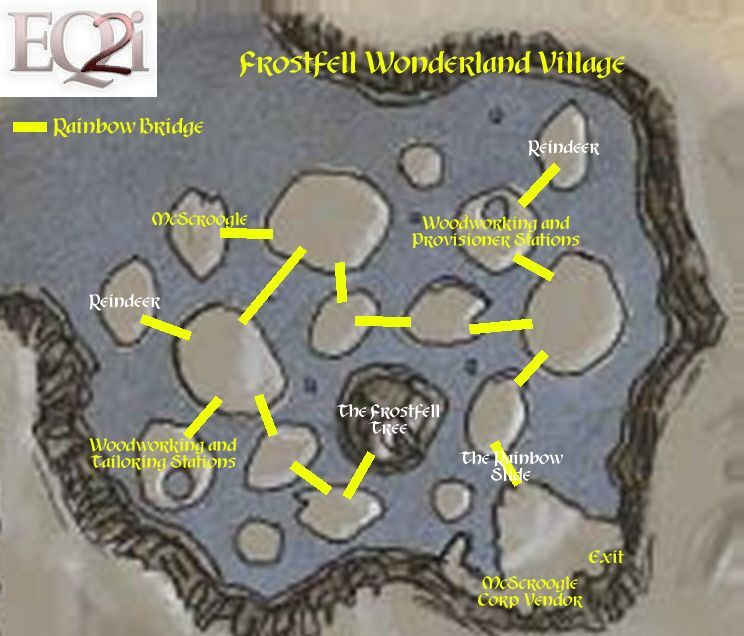 Retrieved from "https://eq2.fandom.com/wiki/Frostfell_Wonderland_Village?oldid=1097595"
Community content is available under CC-BY-SA unless otherwise noted.