While EQ2 has numerous annual world events (holidays) with items to craft, none is quite as extensive as Frostfell.

Holiday items from other annual events like Nights of the Dead can be crafted at any normal tradeskill (crafting) stations all year long, but the items from recipes purchased during Frostfell require holiday-specific stations that differ from normal stations.

The holiday includes an enormous number is of items that one may craft if they buy and scribe the recipe scrolls sold in Frostfell Wonderland Village during the event. For an overview of crafting during the event, see the Frostfell page.

While Frostfell is live (active) on servers, you will find all the stations you need in the Frostfell Wonderland Village. 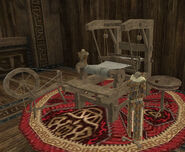 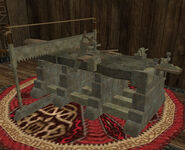 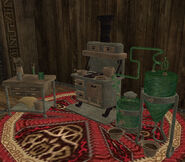 Merry Stove & Keg
Add a photo to this gallery

Frostfell was the first annual world event that included extensive crafting. As such, the developers limited the ability to craft the items to the time the event ran, much to the dismay of crafting and decorating community.

After years of pestering the developers to allow year-round Frostfell crafting, they finally relented and gave the community special Frostfell stations we can use all year.

These are in three chests one can hunt after crafting keys to unlock them. Each chest is identical in outer appearance (icy and steamy) but each one contains one of three Frostfell tradeskill stations.

Before You Get Started on the Hunt

How to get the Key Recipes

Before you can get the recipes for the keys you need to get the daily Frostfell crafting quest, because the only merchant who sells the keys is inside that instance.

To craft all three keys in the Wonderland Village you need:

You may need to check multiple places, as only ONE is up at a given time.

Finding the chests is fun and easy if you team up with friends from your guild. Have one in your group check each location and take turns looting the chests.

Harvestable tracking will find the chests.

This chest contains the Cheery Loom.

This chest contains the Festive Workbench.

This is not intended to be a comprehensive list, due to the sheer number of recipes. Instead, this will help you recall which station is used to make types of items, by using examples.

Because there are far fewer stations to use, the items themselves may not always be found at the station you expect. For example, the holiday-themed weapons come from the books with Outfits You Can Make in the title and most items are made at the loom, except the weapons and shields, which are made at the workbench.

With the fact that the Frostfell elves seem to be chugging a little too much eggnog, remember that statements below include words such as "many" or "most," because there are no hard and fast rules for where you can expect recipes to turn up.

During Frostfell, special materials can be gathered from wrapped holiday gifts on the islands and ice in Frostfell Wonderland Village. They may also be available during the Bristlebane Day event.

If you get the year-round Frostfell Crafting Stations (described above) and a Tinkered Personal Harvest Depot, you can easily store what you need to make Frostfell items all year long.

This table will help you determine which gifts you may chose to focus on if you are low on a particular material.

Three seasonal fuels are needed to craft Frostfell items. These are only sold in the Frostfell Wonderland Village while the event is live, so make sure you vist a goblin vendor who sells them and stock up. They can be kept in Tinkered Personal Fuel Depots in your house or in the Guild Hall Fuel Depot (amenity).

Retrieved from "https://eq2.fandom.com/wiki/Frostfell_Crafting_Stations?oldid=923723"
Community content is available under CC-BY-SA unless otherwise noted.