For an alphabetic listing of articles related to this topic, see Category:Frostfell. 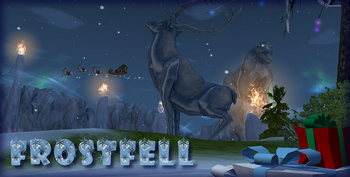 It's Frostfell Time in Norrath! Song fills the air, Norrathians bustle to purchase that special gift, to fix their feasts. Those Frostfell Elves are out in force to bring cheer and gifts of the season to one and all.

Frostfell is the Live Event that begins in December. While in-game, click on the EQ2 radial button and choose the Calendar to check the exact dates. It was first introduced to EQ2 in 2005.

No matter what you do, make sure you visit Santa Glug every 18 (real-world) hours. He has Frostfell gifts for you!

Some Frostfell quests take place in your home city but many occur in a special holiday zone: Frostfell Wonderland Village.

To learn more about the zone's history, to see a map, and for some general tips and tricks, see the Frostfell Wonderland Village page.

New and returning players should consult the Annual quests section below first, as many of the quests inside the Frostfell Wonderland Village are unlocked only after the first quest listed there is complete.

While "regulars" who lurk and edit this wiki do their best to keep this page up-to-date, sometimes the game development moves faster than we do. Please add any new quests you discover to this section. New quests are not added to the game every year, so if this section seems behind, check the Official Forums for announcements. If we reach another year with new quests, the quests and info once found in this section will be moved in favor of what's actually new.

Unlike other events that start and end at 12:01, Frostfell starts and ends in the morning of the following dates: Dec. 7th 2021- Jan. 4th 2022. Please check your in-game calendar for localized times. According to the forums, this year Frostfell will end at 11:59 pm, Pacific Time, on Jan. 4th.

Unlike other events that start and end at 12:01, Frostfell starts and ends in the morning of the following dates: Dec. 8th - Jan. 5th 2021. Please check your in-game calendar for localized times. According to the forums, this year Frostfell will end at 11:59 pm, Pacific Time, on Jan. 5th.

Four items that were previously retired have returned to the event merchants, Giggawat and Garsleblat Gigglegibber:

Kaladim, will have most of the event EXCEPT for:

In addition, Kaladim players who obtain the Frostfell Merry Kitten familiar will find that on the Kaladim server it is turned into a fluff pet spell.

There is a magic closet (wardrobe) located in each of the cities. Click on it to enter the Frostfell Wonderland Village:

The Frostfell currency is Frozen Token of E'ci. To see how many tokens you have, press C (while logged in) to open the Character window and click on your Currency tab.

The tokens can be exchanged within the Frostfell Wonderland Village for valuable items like attractive armor and weapons (with stats), a variety of ice and holiday-themed house items, and more.

Over the years, veterans players have developed two common strategies:

There are four event merchants.

Quests in this section are repeatable only once per year, though a few sub-quests in the series may be repeatable and are noted as such.

To Unlock (most) Quests[]

Before you read on, there is one quest required to unlock almost all of the other quests within the Wonderland Village!

Repeatable annually. Queen Bunny is distraught over the unseemly commercialization of Frostfell. She sends you to save the spirit of the holiday by destroying the McScroogle Corporation's factory.

Icy Something Worth Mining[]

Quests in this section are repeatable at least two times while the event is live. Some may be unlimited.

A Gigglegibber's work is never done (by a Gigglegibber). The goblin who gives this quest will be within the city. See the quest page for location.

These quests scale every five levels, and can be repeated ten times per level by those who who love them; the secret? Change your level by visiting a Chronomancer.

The races are held in two locations and have identical rewards, but those aiming to complete the holiday achievement must visit both locations. It rewards Frozen Tokens and/or various house items and appearance gear, depending on how successfully you gather candy. Those who really work at it can even gain a special title.

Since 2015 there is also a race inside the Wonderland:

Though there's just one crafting quest, it's very rewarding! This quest can be repeated daily. It is a great way to gain tradeskill XP and level. In addition, those who have tradeskill level 90+ can buy lore recipes to craft keys and get Frostfell Crafting Stations to use all year long!

Those who love crafting and decorating houses love Frostfell. Because this aspect of Frostfell is so complicated, most of the info resides on dedicated pages.

Prior to 2013, players were mailed a candy cane to examine and start this quest. The candy cane was replaced with this achievement series. While in-game, press J to open the Journal and look for it in the Live Events section of the Achievement tab.

Quests in this section are once per character (no repeats, ever!)

First appeared in 2005 Completing this quest gives you options for lighting your Frostfell Tree.

The following items are generally available from the Marketplace only while the event is live.

Additional items can be found by searching the Marketplace using the word Frost or other winter-themed adjectives. This makes it easy to find armor, cloaks, and house items with a winter theme that may only be around during the event.

As you explore the city and special zone, you will find buckets of snowballs that you can click to get a pile of 20 Snowballs. Target a mob or your fellow players to have a laugh at the effects.

If you prefer, you can craft a Sturdy Fruitcake to pitch at your fellow Norrathians. Running out? Nearby to one of the goblin merchants is a table with a fruitcake you can click for 20 sturdy fruitcakes as well.