All of the Freeport-style Guild Halls require a guild level minimum of 30 to purchase. The larger the hall of this type, the higher the guild level must be to purchase it.

The Freeport-style Guild Halls were limited to the The City of Freeport and The Commonlands dock when guild halls were first introduced.

The smallest (T1) versions of the halls, with identical visual styles and layouts to those in Freeport, were later added to both Neriak and Gorowyn.

The Freeport-style Guild Halls have a theme of deep burgundy, plum, and grey and ominous details to reflect the "evil" theme of Freeort.

The T1 and T2 halls within Freeport have distinguishable exterior buildings. The Neriak and Gorowyn halls have no notable exteriors beyond a zone in point (e.g. a normal looking a door in Gorowyn.) 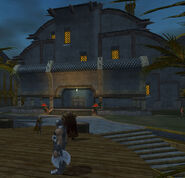 Exterior of the Freeport T1 guild hall, inside Freeport. 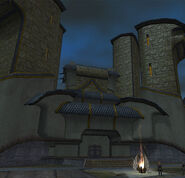 Freeport T2 guild hall from the exterior, inside Freeport.

The Freeport T3 and T4 courtyard

Looking back at The Commonlands from inside a T3 or T4 Freeport guild hall.

The ramp down to the underground dock in a T3 or T4 hall.
Add a photo to this gallery

Sneaking to the T1 HallEdit

If you have a T1 hall in South Freeport and can't use Call of the Veteran to bring a very low level "good" alignment member to you automatically, they can sneak into city. It a dangerous and rather fun activity.

If you die while on this sneak, you will be sent to the Commonlands again and must start over, so take your time and (if possible) ask for the help of a lookout!

If you have friend or trustee access to any Prestige Housing located in Freeport (e.g. an alt or guild member) you can zone out and sneak up fewer stairs. There will still be roaming guards, so be on the lookout!

The cost shown in the table below reflects the weekly cost to maintain an "empty" guild hall. The initial purchase amount is taken directly from the guild leader upon sale of the property.

Note: A Dimensional Pocket Expander may only be applied by the guild leader. Just being flagged as a Trustee will not allow the item to be used.

Retrieved from "https://eq2.fandom.com/wiki/Freeport-style_Guild_Halls?oldid=986846"
Community content is available under CC-BY-SA unless otherwise noted.