The Enchanted Lands were once called the Misty Thicket, a fertile land surrounded by steep cliffs and rivers. It was an isolated haven that provided safety for halflings, fairies and many other creatures. But after The Rending tore apart the world, the area's natural defenses were lost and ever since it has been tormented by fiends the likes of which Norrath has never seen.

Back in the days of the Misty Thicket, the halflings lived a peaceful life in the region's beautiful glades and forests. They gladly shared the territory with the fey, who thrived in these lands more abundantly than anywhere else on Norrath, and had occasional skirmishes with The Goblins of Runnyeye, whom also are native to this land. Sadly, however, the Misty Thicket became separated from the rest of Old Antonica during The Rending and became a target for malevolent demonic beasts. The mist that once permeated the land protecting it from evil dissipated onto the newly formed surrounding ocean and now serves as a blockade - preventing any good from entering while keeping the evil trapped within.

The demons from a distant and unknown realm are beings of true malevolence and chaos. They seem to feed upon the destruction they reap upon earthly purity. The Enchanted Lands have a high concentration of mana, most likely the cause for the prosperity of the magically inclined halflings and fairies, and this proved to be an irresistible target for the demons.

When the demons invaded, halfling society was flung into chaos. Most fled to the new continents, while some chose to stay and attempt to live out a normal life. But when horrific floating eyes and monstrous horned beasts are your next door neighbors, normalcy is a distant hope.

From those halfings that remained, many have been corrupted, forced into demonic subservience of The Overfiend, living out their hollow lives fighting their former friends and family. Those that stood unscathed from the initial invasion fight as they are able, but fear that their struggles are against an inevitable destruction. Yet hope has been rekindled as recently a gang of foolhardy halfling sailors have pierced the veil of the Sea of Mist and opened up passage for any brave adventurers seeking to aid the halflings in the reclamation of their ancestral homeland.

The Enchanted Lands are an island surrounded by water. The adjacent zone of Rivervale makes up the eastern quarter of the island. Centuries ago, the halflings enclosed the southern third of the island with a great wall in an effort to keep out The Runnyeye goblins. The wall was only partially successful, and did not offer defense to the outlying villagers in the lowlands to the east. After long disuse, the wall no longer offers protection, but continues to demarcate the safer regions from the wildest ones. Impassable hills, deep gulleys and sea cliffs make travel challenging, and even the wary traveler may stumble upon enemies with no easy escape route.

The Enchanted Lands can be reached by boat from Nektulos Forest or by the Globe of Swift Travel at ( -2, 5, 89 ) Copy/waypoint -2, 4.5, 89. Travelers arrive at the only town on the island, the Lost Village of Bobick, on the south coast. From there, all travel is done by foot or by mount.

An optional set of quests, Maid for the Mist - Part I and Part II, give more background on the rediscovery and plight of the Enchanted Lands. These quests make the player a participant in the perilous journey to this long-lost island. 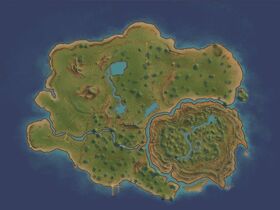