, then follow the ramp up to a central area where the path splits. Keep to the left to reach the zone entrance.

To complete this dungeon, you will need to kill the bosses in this order:

Except for the bosses listed above, all of the ravasect in this instance will respawn. If you die and revive at the entrance, expect that you will need to fight to get back to where you were. The ravasect are highly social and can see through invisibility.

This dungeon is part of the Claymore Timeline and the quest The Bowels of Bonemire. If you are entering the dungeon for this quest, make sure you have the ability to see invisibility, either as a spell or using an item such as Vision Totem of the Owl or a Tinkered Vision Enhancer. If you follow the above order for killing the bosses in the dungeon, you will also find the Tomes of Kildrukaun in the same areas.

Important: If you are on the The Bowels of Bonemire quest, make sure you kill the Tome of Kildrukaun Volume X before you kill The Devourer. Otherwise you will need to reset the instance and run it again because killing her is the next step in the quest after killing the tomes.

If you are on the chronomage mission Path of the Past - Den of the Devourer, you should set your level no higher than 75. The Devourer is level 69.

There are two additional bosses inside Hive Vornerus you can find on the way to the entrance to this dungeon:

Before it was taken over by the ravasect, the Den of the Devourer was known as the Halls of Drukaunis. The Crystal of Drukanis, which drops from The Devourer, is what you need to read the Tomes of Kildrukaun as part of the search for the Qeynos Claymore. 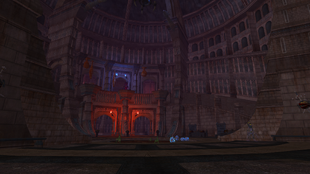 Add a photo to this gallery
Retrieved from "https://eq2.fandom.com/wiki/Den_of_the_Devourer?oldid=1154007"
Community content is available under CC-BY-SA unless otherwise noted.