Darklight Wood is the lower-level counterpart to Nektulos Forest, containing the long-lost evil city of Neriak, City of Hate. It is a level 1-20 newbie zone, containing about 100 well-organized quests. Physically it is the smallest of the five starting locations in EQ2, but it connects directly to The Commonlands on one side and Nektulos on the other side, making it a convenient hub for the low- and mid-levels.

Darklight Wood is an extension of the greater Nektulos Forest, and has served as home to the Tier'dal for millennia. Furthermore, the ancient dark elf city of Neriak, City of Hate is located here and is protected from invaders by these woods. All dark elf warriors know these lands better than any interloper could ever dream of knowing them. - (Source: Nektulos Forest, by Torq De'Rech)

Recently, Darklight Wood has seen an upsurge in undead, vampire and cultist attacks, increased aggression from it's natural inhabitants, the Sullian Fairies, Funnelweb Spiders and Nightmarsh Fungusmen, and perhaps most daunting, a growing Thexian presence. This final group is comprised of purely Tier'dal fanatics that seek to remove the current ruler of the dark elves, Queen Cristanos, from power and install Talvus Thex, Cristanos' son, as king of dark elvendom on Norrath. With such strength of number and will, could The Thexians be the driving force behind the destabilization of this prized forest? Laexyra Y'Barriath and The Dread Guard believe so and they require the skill of a brave adventurer to sort this mess.

Darklight Wood is a relatively small zone, with a large open central area based around Smoldering Lake and Nightshadow Rise. Several smaller valleys extend in all directions from this central area, each with unique terrain features. When compared to the larger Nektulos Forest, Darklight Wood is better lit and has less obstacles, but is just as densely populated with creatures.

The Wood is also the starting zone for all Arasai. Newly created Dark Elves, Iksar, Ogres, Ratonga, and Trolls can also choose to start in this zone. 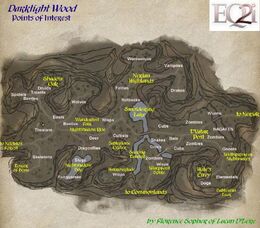 Darklight Wood is a relatively small zone and has no intra-zone griffon routes. There's a connection to The Commonlands in the middle of the zone on the south side, and a connection to Nektulos Forest at the far west end. At Shadow Oak there is a griffon ride that will take you to Butcherblock Mountains and boat travel to lands accessible by sea is available from the Dockside Markets inside Neriak.

The dark elves are so protective of this land that there is no Mariner's Bell located anywhere, and if a player desires fast travel to the Wood then they must first go through Neriak or a roundabout way through Nektulos Forest or The Commonlands.

Neriak, City of Hate, the capital of the dark elves, is located at the eastern end of Darklight Wood. The once burgeoning town of Hate's Envy is located to the south of Neriak. Various military camps set up by The Dread Guard, The Freeport Militia, and The Thexians are strewn about the area. Furthermore, the Shadow Oak sits in the northwestern corner of the zone and is home to dark elven druids. Finally, there is a bizarre fair set up near the center of the forest called Wanderlust Fair.

The Dread Guard that patrol Darklight Wood will tolerate all characters from Freeport and Gorowyn. Characters from Qeynos, Kelethin and New Halas can quest here, however they must avoid these guards that are found at all major quest hubs and along the roads.