Professor Cogglesworth is a gnome sage of some renown. While he is well-known for cataloging a compendium of legendary figures, he has also compiled a journal detailing the lands he and others have visited. The professor has gone to great lengths to compile accurate information, but it should be noted that some entries within this journal may not be entirely factual. Cogglesworth is an exceptionally intelligent scholar, but history and lore are sometimes a matter of perspective.

We continue today with two entries from Professor Cogglesworth's journal: Lavastorm and Everfrost.

Lavastorm is a land of unrelenting volcanic activity. One look upon this island and one can clearly see it is a hellish environment that a weary soul could never hope to survive in. The island of Lavastorm is comprised of a series of small volcanoes surrounding the greatest volcano on the face of Norrath; Mount Solusek. The land is like a great spiral staircase leading to Mount Solusek at its core. Steep volcanic mountains and sweltering rivers of lava form a natural barrier to the steppes of this spiraling staircase.

The heat in the air of Lavastorm is nearly unbearable, and the torrid coastal waters boil menacingly. Ash and magma billow from unpredictable vents, spewing darkness and fear from the very depths of the earth. For anything to survive in this harsh environment is astonishing, which speaks of the potential threat and power of Lavastorm's indigenous creatures.

This violent island was scene to great magical battles, so they say. It is said that this was the site of a great battle between drakota and fire giants. The drakota, as it is told, sought entrance to Nagafen's lair to destroy him. It was on these magmatic steppes that a legendary dark elf sorceress known as Najena made a pact with Nagafen and the fire giants. She employed the help of the titanic elven golem, Magolemus, to help repel the drakota from Lavastorm.

The horns of battle are silent now, but the remnants of this conflict and citadels lost to the ages hide somewhere within the dark clefts of this brutal territory.

To say that Everfrost is a desolate arctic wasteland would be quite the understatement. Everfrost was once an arctic range of majestic snow-capped mountains, winding valleys, and ice-blue rivers. Today, it is a frozen purgatory that is both awesome and terrifying in its unearthly majesty.

Titanic glaciers rule this domain, having destroyed all but one of the great Everfrost Peaks in their hungry trek across the broken continent. Blizzards constantly ravage the land, pelting the region with needles of ice as sharp and unpitying as a knight's blade. Funnels of frost and bitter winds often descend from the eternally gray skies, scarring the land in the wake of their destructive rampage.

The region of Everfrost was torn asunder during the great cataclysm, leaving behind several dangerously scarred isles. An equally perilous lagoon should not be approached without caution, as there have been reports of megalodons patrolling the waters in search of blood.

Halas, home of the northmen, is no more. The city was rent by the celestial fireballs that rained down upon Norrath during the cataclysm. Those who survived the initial disaster either fled the region or were consumed by the unleashed hunger of the land. As time went on, Everfrost turned from an inviting homeland to a treacherous glacial wasteland, devoid of floral plant life or any semblance of mercy. 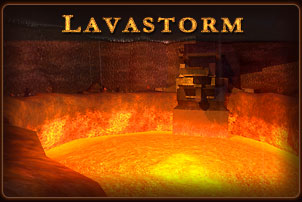 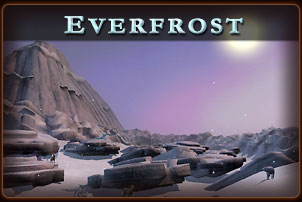 Retrieved from "https://eq2.fandom.com/wiki/Cogglesworth%27s_Tour_of_Norrath:_Part_2?oldid=40097"
Community content is available under CC-BY-SA unless otherwise noted.