Professor Cogglesworth is a gnome sage of some renown. While he is well-known for cataloging a compendium of legendary figures, he has also compiled a journal detailing the lands he and others have visited. The professor has gone to great lengths to compile accurate information, but it should be noted that some entries within this journal may not be entirely factual. Cogglesworth is an exceptionally intelligent scholar, but history and lore are sometimes a matter of perspective.

We begin today with two entries from Professor Cogglesworth's journal: The Enchanted Lands and Zek, the Orcish Wastes.

The Enchanted Lands were once home to the halflings, a merry folk who lived a peaceful life in the beautiful glades and forests. This land was originally called the Misty Thicket in the days before the rending tore the lands apart. They gladly shared the territory with the fey, who thrived in these lands more abundantly than anywhere else in Norrath.

When the cataclysm befell the old continent of Antonica, this place was somehow spared from destruction, and its beauty has only flourished in the time that has passed. Yet, despite this fortune to grace these lands, its modern state has mysteriously become unnerving and its future remains uncertain.

Creatures from a distant and unknown realm have invaded this most pure and sacred of havens for nature and its guardians. Beings of true malevolence and chaos, they seem to feed upon the destruction they reap upon earthly purity.

The halflings suddenly disappeared when the foreign creatures first descended upon the land. Today, their tranquil hovels are empty, having been abandoned without reason or warning whilst magical spirits of nature were twisted into chaotic, maddened agents of the invading force.

Those that remain unscathed fight as they are able, but fear that their struggles are against an inevitable destruction.

Zek, or The Orcish Wastes as it is often called by men, is a portion of the remnants of the once-mighty Jaggedpine Forest. The orcs of the Deathfist Empire have held control of the entirety of this island for many years and, in that time, they have reduced the once-sprawling forest to a mere husk of its former glory.

Much of the forest has been stripped down to barren, charred earth. The orcs have begun mining deep into the ground for iron and coal, and use the timbers of the ancient Jagged Pines to construct their warships. What was once a thing of beauty is now, for the most part, a grand redwood forest on the verge of becoming a wasteland of orc industrialization.

Zek has become a battlefield of sorts, as a band of woodland defenders named the Green Hoods have seized control of a coastal keep. From this keep, they now launch assaults against the orcs stationed on the hills opposite the beachhead. They also sneak small teams through the enemy lines and send them deep into orc territory to gather information and to disrupt orc organization. 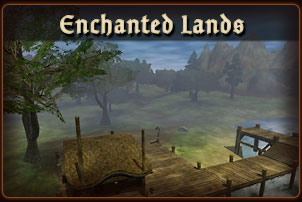 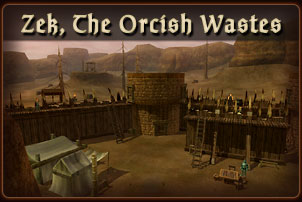 Retrieved from "https://eq2.fandom.com/wiki/Cogglesworth%27s_Tour_of_Norrath:_Part_1?oldid=40094"
Community content is available under CC-BY-SA unless otherwise noted.