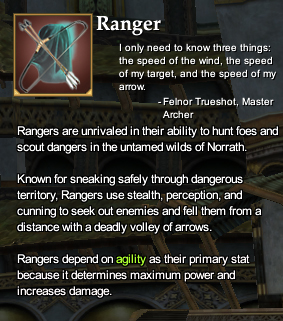 The Ranger is an ideal profession for those who seek mastery of the wilderness. Unrivaled in their abilities to hunt foes and locate dangers in the wilds of Norrath, the Ranger best serves their party in the midst of combat. Using stealth, perception, and cunning, the Ranger flushes out the enemy and initiates combat. The Ranger can then drop back from the frontlines where they can attack with ranged weapons.

The first spell (and level) of each type is listed. See the detailed description for the full upgrade line. Many Ranger arts have high range, up to 50 meters for ranged attack arts.

Combat Arts by Tier and LevelEdit