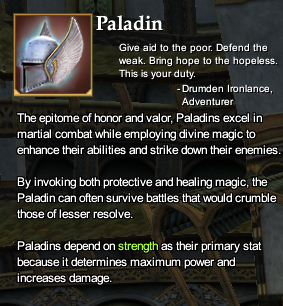 Those who desire to fulfill a role of nobility, honor, and virtue will find the Paladin profession to be ideal. The Paladin excels in martial combat and possesses divine magical abilities to enhance their skills in combat. As a true martial combatant, the Paladin is most efficient on the front lines where they are able to engage the enemy in close combat. By invoking their protective magic, the Paladin may temporarily augment their martial skills, increasing their capabilities for both defense and healing during a fight.

The first combat art in each category is listed. See the detailed description for the full upgrade line.