SoE has been very inconsistent regarding ghouls in EQ2. In EQ1, ghouls were a distinct type of undead with a unique model. In EQ2, however, there is much inconsistency with the name 'ghoul', drop tables, and even monster models. Ghouls first appeared in name in Stormhold, but were identical in all but name to zombies. In the Desert of Flames expansion and the Nektulos Forest revamp in LU37, ghouls were black-tinted versions of the aqua goblin model programmed to have a shambling walk, but they were still susceptible to Zombie mastery attacks. Finally, in Echoes of Faydwer, ghouls appeared in the Loping Plains. This type of ghoul (pictured to the right) is the only "true" ghoul. It is not a zombie subtype and not susceptible to Zombie mastery attacks. 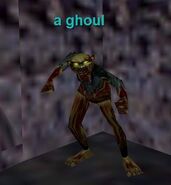 a ghoul as they appeared in EverQuest 1