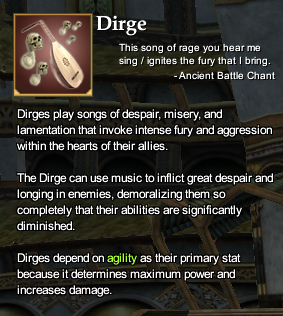 The Dirge is an ideal profession for those who desire to use songs of misery and sorrow to inspire intense battle rage in their allies and despair in their enemies. The Dirge best serves his party behind the frontlines where he can play mournful songs behind the protection of his allies. The Dirge’s songs inspire bold feats in allies, boosting their attributes and skills, and demoralize enemies, diminishing their strength in battle.

The first spell in each category is listed. See the detailed description for the full upgrade line. Most dirge damage spells are disease.

Spells and Combat Arts by Tier and Level

D
Retrieved from "https://eq2.fandom.com/wiki/Category:Dirge?oldid=467381"
Community content is available under CC-BY-SA unless otherwise noted.