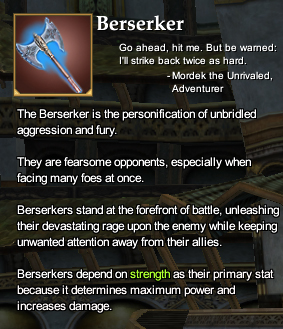 The first ability in each spell line is included. See the detailed description for the full upgrade line.

Abilities by Tier and LevelEdit

B
W
Retrieved from "https://eq2.fandom.com/wiki/Category:Berserker?oldid=986057"
Community content is available under CC-BY-SA unless otherwise noted.