Go to majdul, to the golden scepter, on the west side theres a guy who tells a story for 2p. listen to it. Story Text:

Listen well friends of fables and myth. Listen well to the ancient tales of Norrath. Gorynn, the name brings the greatest gladiators to touch their heads to the sands. He is a powerful champion that has long ruled the titanic arenas of the realm of war. Neither god nor beast could defeat him within the spectacles of the circus of competitive combat. And at his side…the unbreakable weapon…Gorynn’s Fist. But the Fist was not always there. The planar champion, Gorynn, long believed that there was no weapon worthy of his respect, mortal or divine. Such a boast angered the blacksmith of flames, Varig Ro. A challenge was made where the fists of war would meet the hammers of flame. Should the brawny smith fail to emerge victorious, an epic weapon must be crafted in honor of Gorynn. Varig Ro and Gorynn would meet in the Coliseum of Zek. The battle of Fist and Forge was a titanic duel between gods. For days and days, Varig Ro fought the fury of Gorynn. In the end, the gladiator would remain undefeated. Varig Ro should have died by the lowered thumbs, but he had a service to pay. The god of forges went back to his realm of flames and with great resentment crafted one of the finest weapons ever to exist, a magical cestus named Gorynn’s Fist. Gorynn held the great cestus and a sadistic smile coverd his face. He knew the weapon could not be broken in battle. And so it was, from that….Gorynn’s Fist would unite with the god of gladiatorial combat. It would paint many planar battlefields the color of combat. Each canvas bathed in the blood numberous foes and challengers. Whether it is in an arena or a battlefield, Gorynn’s Fist would prove to be superior. However, as with most gods, their urge to influence mortal realms grew strong and even the mightiest of weapons are often offered in the name of the gods. Gorynn was no different. Agrand arena was built where the council of Rathe rest in defeat. This is where Gorynn’s Fist was rewarded to a child of Zek, an ogre gladiator named Rogtog Corpsemaker, chamion of Gorynn’s arena on Norrath. It was said that Gorynn’s Fist was baptized with the planar powers of Zek, making it an even mightier weapon than what Varig Ro intended. Rogtog would display this power as he joined the Second Rallosian War. Hundreds fell before the Fist and soon Rogtog would be called to the front lines of the war where the City of Might, Freeport, lay in siege. The Battle of Defiance was upon him, Fist in hand. The Battle of Defiance would be Rogtog Corpsemaker’s final taste of glory. He walked into a battle he knew would bring his death. This was not the cause of great courage, it was the will of Gorynn’s Fist. Such a powerful weapon often commands the wielder. The planar cestus desired the blood of battle, but it too would fail to remain undefeated. The cestus fell to the ground, a bloody and severed ogre arm still grasping it. No one knows what fate befell Gorynn’s Fist. Some say the gods visited the crimson bricks of Val’mar and reclaimed the celestial cestus. Others say it was discovered by the first Freport monks to turn sour, still held in secrecy by their veilded leader. One thing is for sure, Gorynn’s Fist did exist and it is revered as the greatest weapon a bruiser could weild. And so ends the story of Gorynn’s Fist.

Go to SFP, by the door to WFP and hail the juggernaught taskmaster.

Go to the docks of SFP and hail a roughhouser champion.

collect the gambling chips from the bars. 3 in WFP, (blood haze, the bar next to it and the coalition bulding) 1 in SFP bar, 1 in jade tiger in NFP and 1 in EFP.

After you get the 6 champions go back to the taskmaster who will send you to the big boss in the blood haze inn. Defeat the big boss to receive Gorynn's Fist. Equip the Fist and hit the first mob you see. You will receive a broken Gorynn's fist. Examine it to get the next quest.

Go to the blacksmith in WFP and talk to him. He will send you to the common lands. Make sure you bring 50 ferrite clusters with you so you don't have to make two trips. In the dervish camp is a craftsman you are looking for. Then it is back to the big boss for more info.

Then it is off to find an Ogre named Rallok in JW. He is between the Red and white flightpaths. Talk to him

Borga Rallok says to you, "A salute shall get you a warning from me. Be lucky it was not death. Leave before I decide to enslave your soul!"

You say to Borga Rallok, "You will speak to me about Gorynn's Fist or I will break you limb from limb."

Borga Rallok says to you, "Haha! A bruiser. A master of the fists of Zek. An entertaining and effective art of war. Perhaps you are worthy of asking your question."

You say to Borga Rallok, "Here is all you need to know!"

Borga Rallok says to you, "Haha! I will not flinch. I have my own art of war. Now, should you feel your art is good enough, then come back and challenge my art. Until you can best my power, there will be no query."

You say to Borga Rallok, "I will be back to beat you down."

Borga Rallok says to you, "The bruiser is back. Are you ready to test your art of war against my spirit force?" You say to Borga Rallok, "I am ready to defeat your art."

Borga Rallok says to you, "You defeated the spirits of this land."

You say to Borga Rallok, "I thought you said you were going to challenge me, not the local denizens."

Borga Rallok says to you, "My art of Zek is the power to subjugate the forgotten spirits of battlefields. These soldiers that have fallen and not heard the death toll of Ethernere are mine to control."

You say to Borga Rallok, "They were mine to destroy."

Borga Rallok says to you, "Let's end the idle conversation. Speak your question so that we may end this cordial meeting."

You say to Borga Rallok, "I seek Gorynn's Fist, the weapon forged for the demigod of gladiatorial combat."

Borga Rallok says to you, "It is a weapon fit for a bruiser, but only a Rallosian bruiser. Go now, you are not worthy to know of such an artifact."

You say to Borga Rallok, "One could say that all bruisers are worshipers of the gods of war. Our lives are devoted to displaying the brutality of martial arts. We are machines of war!"

Borga Rallok says to you, "You are right. However, you are not sworn to the Rallosian Empire."

You say to Borga Rallok, "The Rallosian Empire is no more. I would have joined the war. What better homeland for a machine of war than the kingdom of Rallos?"

Borga Rallok says to you, "Perhaps we can assist each other. Perhaps two that honor the art of war can come together to rescue an artifact forged for our gods. I shall share the path of Yorula."

Borga Rallok says to you, "Yorula was a nightfall giant warlord that fought alongside the great ogre soldiers of the second coming of the Rallosian Empire. It was in the wake of the death of that empire that Yorula acquired Gorynn's Fist, taking it from an overconfident monk of the Ashen Order."

You say to Borga Rallok, "I have heard that this Yorula fled to Kunark with Gorynn's Fist." "It was among the giants of Kunark that Yorula found safe haven during the great crusade to slaughter the remnants of the Rallosian Empire. It was with the help of her kindred's greatest shamans that they bound the Fist within a magical chest."

You say to Borga Rallok, "Tell me more."

Borga Rallok says to you, "The magic chest was bound by a complex arcane seal. The lock required four obsidian amulets known as the Four Arms of Gorynn. How fitting, seeing that the great demigod Gorynn was a member of a four armed planar race. "

You say to Borga Rallok, "Where are the Four Arms of Gorynn?"

Borga Rallok says to you, "Yorula was a great defiler of her kind. With those powers she summoned four great champions of war to Kunark. It was here that the champions were forever changed. They became immortal guardians of the four amulets. Each with an amulet, they departed the land to spend an eternity waiting for a Rallosian to rise to the challenge and take their amulets from them."

You say to Borga Rallok, "And what of the chest?"

Borga Rallok says to you, "I am still seeking the chest. However, I do know a bit about the amulets. Let us form a Rallosian alliance. You will honor the gods of war by scouring Norrath's far reaches in search of the four amulets. I will find the chest. Together we will open the chest and release the glory of Gorynn." You say to Borga Rallok, "Can you help me find the champions that hold the Four Arms of Gorynn?"

Borga Rallok says to you, "I know little, but I can share this. There is said to be four ancient krom stones that hint of their locations in Norrath. During a massive raid of the krom mine, Konikor, The stones were claimed by the Di'Zok. Those vile creatures still have them. You do not need the stones, but you must read their riddles."

You say to Borga Rallok, "I will find the stone and then track down the Four Arms of Gorynn."

Borga Rallok says to you, "And I shall carry on my quest for the chest. We shall meet here again. Go now, swiftly! You must find that stone with the riddle of the Four Arms of Gorynn."

Find 4 Stones: They are located in the Chardok palace. 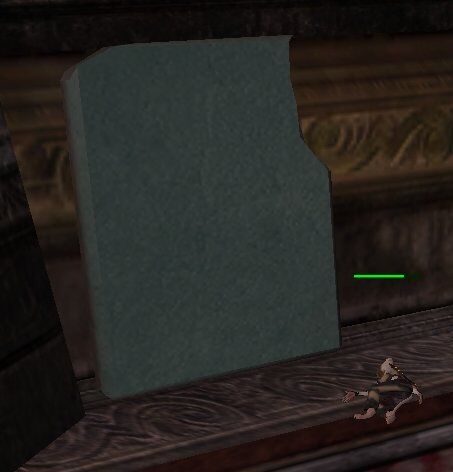 Stone #1, 2, and 3 can be found in the library hidden section opened by giving the three encyclopedia books to the golem. You need to right-click and examine it to get the update, which takes 3-4 seconds. It is possible to do solo, however, you have to be careful of the dizoks. There is one in each of the bottom three rooms.