For an alphabetic listing of articles related to this topic, see Category:Brew Day.

Brew Day is an annual event that tips a hat and a frosty beer stein to Brell Serilis. The in-game festivities start around the beginning of March and run until (or just beyond) the real-world holiday known as St. Patrick's Day. It made its first appearance in 2006.

To check the exact dates, log into the game and click the EQ2 button in the bottom right of your screen and choose Calendar from the list of options that opens. Keep in mind that the start date and end of (most) events is midnight PST, due to the location of the main office of Daybreak.

Check your in-game mail for the announcement and clues about where to go to enjoy this event. See the event announcement at the end of the page if you accidentally delete that mail.

Note: There is a Brew Day/Walk Through page that helps you do these quests with less fussy traveling. Some quests get harder as you get drunker, it's advisable to read up first.

Many of the quests require your character to consume alcoholic drinks that cause a screen blur that is supposed to mimic drunkenness; for some players this presents a problem as it can cause headaches.

This section highlights new content added most recently. Please move any info into the main article below when/if newer content is live each year.

Since 2017, the full event is now available on TLE with the exception of the More Brews is Good News collection, because some of the shinies are only available in Tranquil Sea and in Maldura.

The Bar of Brell is the main quest-hub for Brew Day events, and can be accessed during the festivities from the following locations: 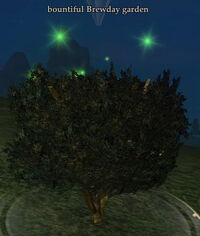 To check the amount of event currency you have on hand, press C to open the Character window and click on the Currency tab.

No matter which tradeskill you begin or master, any crafter can make the items in the recipe books.

While most crafted items are house items themed around beer, wine, booze, a variety of tableware, and pub-style food, recipes do include other items, such as curtains. Some items, like the Frothy Tankard (weapon), can be used as appearance gear.

The following recipes are sold by Balin Copperfoot for 60s 90c (standard currency) per recipe. If you missed this event in the past, the previous years' recipes are always available while the event is live.

In order to craft items from the holiday-themed recipes, you must gather materials from Bountiful Brewday Garden, a shrub with a green particle effect.

Repeatable at Least Once per YearEdit

Quests that can be repeated multiple times per year have had their title in bold to make them easy to find below.

Brew Day now offers far too many items to provide a full list, but some popular and returning items (as examples) include:

Each year players get an in-game mail announcing the return of Brew Day to Norrath.

"Make this Brewday Festival a memorable one! Use the magical keg we've opened near yer city to enter the festival's official brew house, The Bar of Brell. I invite ya in to grab a stein of ale while The Burglars entertain. While yer here, maybe ye'll help me figure out what's causin' all that ruckus below the bar. If not, well, ye'll also find items to craft, adventures and rewards both new and familiar! Course there's plenty of activity outside the bar, too. There's news of goblins stirrin' trouble in Butcherblock Mountains and the Enchanted Lands! And if'n ya find yerself crawling through other bars and drinking holes be sure to keep yer eyes peeled for special items of interest to collect!

The Bar of Brell's Head Bartender"

Retrieved from "https://eq2.fandom.com/wiki/Brew_Day?oldid=944374"
Community content is available under CC-BY-SA unless otherwise noted.