watch 02:45
Wiki Targeted (Games)
Do you like this video?
Play Sound

This is an annual live event that begins in mid-to-late March or April, close to the real-world celebration of the Spring Equinox and/or Easter.

To check the exact dates, log into the game and click the EQ2 button in the bottom right of your screen and choose Calendar from the list of options that opens. Keep in mind that the start date and end of (most) events is midnight PST, due to the location of the main office of Daybreak.

Check your mail for an announcement of this event on Live servers. The event lore, sent via an in-game mail can be found at the end of this page if you accidentally delete the in-game version of the announcement.

This is a rather brief event (typically five days) that has very simple activities, rather than the complex quests seen with most other live events.

Editors: This section highlights new content added most recently. Please move any info into the main article below when/if newer content is live each year and add a new

Notes: As with all holiday Overseer quests, starting these require:

Rather than quests, this event is all about the hunt! Hiding within the major home cities (those with player housing) are several egg-themed pets. Without any combat, players can capture these eggs. Grab them before they move!

Players can take any captured egg-themed Fluff Pets to the Eggschanger merchant, where they can be exchanged for House Pets of the same type.

uA Beast'r Egg Hunting Guide was created for players who are completionists looking to attain the Achievements (and titles) or those who collect fluff and/or house pets. It lists common egg locations and has other hunt tips.

Impatient players can R click on any named, epic city guard and select the Find NPC option to ask them for help. If an egg is nearby, the guard will mark the map (press M to open it) and a waypoint might lead to an egg location if no one else has collected it or the egg hasn't run away again. Ask the guard using the NPC name, "Beast" but expect mixed results, since it can point you toward the vendors or the activated pets of other players. The most difficult location to hunt eggs in is Greater Faydark, because the guards are rather close to the merchant and they will point you to the same location many times over. Asking a guard for "Eggschanger" will send you to the city's event merchant.

Players can buy festive items or exchange their captured egg fluff pets (from summoned) for the house-item version of the same type. The collectible event "shinies" (glowing in purple) are found near the NPCs for this event.

See the Beast'r Eggstravaganza Merchant Items page for a list of items to buy.

Whether you are hunting them in the wild, you summon a captured egg to follow you, or place one in your home after visiting the Eggschanger Merchant, the Beast'r Eggs all have the corresponding appearances below. 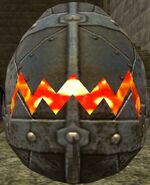 Rumbly Beast'r Egg
Add a photo to this gallery

Players must visit at least three locations and collect three location-limited shinies (nine total) to complete the collection Colorful Egg Shells. The shinies are all located near the same area as the merchant and celebrating NPCs. See the section about merchants for general locations.

The shinies are grouped by location with three found in the same general area. Players can hunt shinies based on the locations' alignment, but it's only necessary to visit one of the two locations in the table below to collect the three shinies found there.

For example, visit Freeport or Qeynos, NOT both of those locations, as they have the same shinies available.

Lower level-characters may want to visit the option that matches their alignment (based on their character's home city) to avoid be attacked by guards.

This event has three achievements

Per the official announcement, the lore for the event centers on the theme of Springtime growth:

Every year as we enter the season of Growth, Tunare whispers to the animals of the forest to let them know that the Spring season is arriving. In their bubbling excitement, the animals will behave exuberantly as they await the gifts of nature that come to them during the season of renewal. During this time, the excitable critters sometimes leave gifts for the realm of man as a way to share their joy in the coming of spring.

This event does not have any retired items as of 2019.

The official Daybreak event announcement for 2019.

Retrieved from "https://eq2.fandom.com/wiki/Beast%27r_Eggstravaganza?oldid=1302961"
Community content is available under CC-BY-SA unless otherwise noted.