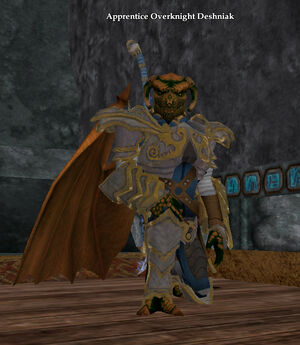 In order to research the recipes this apprentice offers, the crafter must be at least level 90 or above.

The quest to obtain this tradeskill apprentice is the Dracur Prime (Advanced Solo), making it difficult to obtain.

The stone to access this apprentice is tradeable and can be found on the broker on rare occasions, but it typically sells for a hefty sum.

The common apprentices do not have any recipes for furniture items, so those who decorate extensively, may want to obtain Apprentice Elder Yelnar (Dracurion Mastercraftsman).

Retrieved from "https://eq2.fandom.com/wiki/Apprentice_Overknight_Deshniak?oldid=1051830"
Community content is available under CC-BY-SA unless otherwise noted.